Review: How an Economy Grows and Why It Crashes 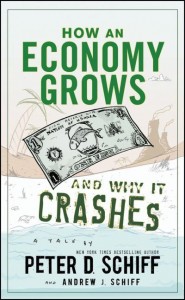 Very few economists predicted an economic catastrophe in 2007. Even following the crash, many continued to claim that our present economic course was fine. As for today? “Three years into the mess, economists now offer remedies that strike most people as frankly ridiculous. We are told that we must go deeper into debt to fix our debt crisis, and that we must spend in order [to] prosper” (pp. xi–xii).

The source of such seeming obliviousness, according to Peter and Andrew Schiff, is the early-20th-century economist John Maynard Keynes. According to the Schiffs, Keynes taught that governments could smooth market volatility, increase employment, boost growth, and raise living standards simply by going into more debt and printing more money. Although they grant that Keynes was smart, the Schiffs say he developed some very stupid economic ideas—ideas that are false, dangerous, and causing the collapse of America’s economy. The Schiffs set out to counter these harmful ideas in How an Economy Grows and Why It Crashes.

The book is an extended allegory of U.S. economic history, with supplementary discussions and illustrations. It begins with three men living on a tropical island, each subsisting on one fish per day, which he catches with his bare hands. One of the men, Able, devises a better way to catch fish: a net. Thus equipped, he hopes to catch more fish, and faster, leaving himself spare time to make new clothes.

After a long day spent constructing his net, having had no time to fish, Able goes to bed hungry. But the next day, using his net, Able snags two fish within an hour. This changes Able’s life in a big way—and allows the Schiffs to conclude their first chapter with a fundamental truth: “By doubling his productivity Able is now able to produce more than he needs to consume. From gains in productivity all other economic benefits flow” (p. 9). They further develop this point, showing that it remains true whatever the size of the economy and that, “although it was never his intention to benefit anyone other than himself, Able’s capital [his extra fish] helps everyone nevertheless” (p. 14).

In this case, Able lends each of his fellow islanders one fish now in exchange for two later—allowing them to build their own nets (without going hungry like he did) and thus increasing “the island’s fishing capacity from three fish per day to six” (p. 21). From there the island economy continues to expand—as the productivity of the workers, their savings, and their investments work together without interference. The three build huts, an elaborate fish catching system, canoes, carts, and surfboards. . . .

View all articles by Daniel Wahl →
Letter to the Editor
Review: The Passion of Ayn Rand’s Critics, by James ValliantReview: The Flaw of Averages, by Sam L. Savage
Return to Top