Review: The Passion of Ayn Rand’s Critics, by James Valliant 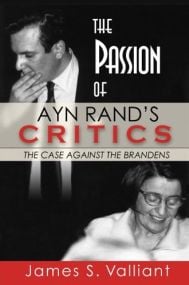 Ayn Rand was an influential and controversial novelist and philosopher whose name invariably ushers in a flood of debate. Unfortunately, not all of the controversy stems from Rand’s radical ideas, such as her advocacy of egoism and laissez-faire capitalism. Distracting from the discussion of her ideas is a controversy concerning claims made about Rand’s personal life and character in the works of two of her former students: Barbara Branden’s The Passion of Ayn Rand (Doubleday, 1986) and Nathaniel Branden’s My Years with Ayn Rand (Jossey-Bass, 1999). For eighteen years, the Brandens (who were married to each other from 1953 to 1965) were among Rand’s closest friends. However, their relationships with Rand ended abruptly in 1968, at which point they became her most vocal and publicized critics. In their books, both of which were published after Rand’s death, the Brandens tell their stories.

James Valliant’s The Passion of Ayn Rand’s Critics: The Case Against the Brandens is the first book-length critique of the Brandens’ allegations. Valliant’s book is divided into two parts: the first, an analysis of several dozen claims made by the Brandens about Rand; the second, a selection of journal entries from Rand concerning psychological issues that Nathaniel Branden revealed to her during their romantic relationship. (Rand was happily married but had an open affair with Nathaniel Branden, with the full knowledge and consent of her husband and Barbara Branden.) The purpose of Valliant’s book is to dispel false claims the Brandens made regarding Rand, setting the record straight for those interested in the details of her life.

Valliant is a prosecutor by profession, which shows in Part One of the book, where he employs a legalistic style to present evidence showing that many of the Brandens’ allegations about Rand and the events of her life are either baseless or false. Valliant cross-examines their “recollections,” exposing the fact that their accounts repeatedly conflict not only with a wealth of other sources—including Rand’s private journal entries—but also and often with themselves. For example, Valliant shows that Barbara Branden’s claim that Rand’s insensitivity to the feelings of her husband, Frank O’Connor, regarding her affair led him to years of alcoholism can hardly be substantiated: . . .

View all articles by Roderick Fitts →
Letter to the Editor
Review: Neoconservatism: An Obituary for an IdeaReview: How an Economy Grows and Why It Crashes
Return to Top