Review: Neoconservatism: An Obituary for an Idea 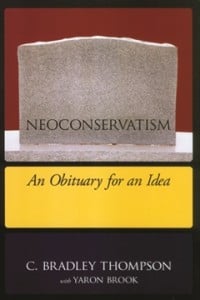 In Neoconservatism: An Obituary for an Idea, authors C. Bradley Thompson and Yaron Brook show that the neoconservative intellectual movement is very much alive. Those who carry its banners are “deeply embedded in America’s major think tanks, philanthropic foundations, media outlets, and universities” (p. 1). Then why would the authors select a title that implies that the object of their study is dead? The title is ironic, in part because the authors hope that their book may cause the movement’s death, thus “inspiring the need for some future obituary” (p. 2).

The authors wrote their lean work to Americans “who value our nation’s founding principles” (p. x). The main message is that neoconservatives, who boast of being “in the American grain,” threaten those principles. That inference is based on an investigation that ranged across a diverse and sometimes deceptive intellectual movement. The authors examined the movement’s leaders today; the movement’s publicly stated guiding ideas; the lineage of the ideas passed down from the movement’s ex-Marxist founders; the actual, but usually unstated, principles of the underlying neoconservative worldview; and, finally, the consequences of the guiding ideas and worldview in political policies that affect American lives.

A second factor complicating the authors’ research was, they note, neoconservatives’ denial that the movement even has an underlying philosophy, that is, a view of the basic nature of the world, a view that sets the context for and therefore shapes their political views. Instead, trying to avoid debate about roots, neoconservatives vaguely describe their intellectual movement as a “persuasion” or “mood” guided, the authors explain, by “a nondefinable, ever-changing ‘public interest’” (p. 136).

A third hurdle for Thompson and Brook was separating the neoconservatives’ “esoteric” teachings (their actual, private, motivating ideas), from their “exoteric” teachings (the ideas they state publicly to motivate the common man). “The seriousness with which [neoconservatives] took the exoteric/esoteric distinction and applied it to their own thought and policy prescriptions makes the task of unraveling and understanding their project very difficult” (p. 69).

For these reasons and others, Thompson and Brook have produced a book that is necessarily complex in content. What approach do the authors take to presenting such material?

The ten-chapter book starts, in the authors’ words, by examining “the outer layer of neoconservative political thought” (p. 23), the “exoteric” political teachings that appear in neoconservatives’ own public statements. Chapter 1 (“The Path to Power”) describes the neoconservative program for “Reforming the ‘Stupid Party,’” which means transforming the Republican Party into an advocate of “Big-Government Conservatism,” the ideology of a conservative welfare state. Chapter 2 explains the neoconservative “philosophy of governance,” which includes “thinking politically,” a euphemism for setting aside morality and taking whatever steps, including coercion, are needed to shape society.

The second phase of the book traces the historical roots of neoconservatives’ public statements. In chapters 3 through 6, the authors show that the “godfather” of the neoconservative movement, Irving Kristol (1920–2009), began in 1952 to be influenced by the writings of philosopher Leo Strauss (1899–1973), who, in turn, had been influenced by Mussolini, Heidegger, Nietzsche, Maimonides, and Plato.

The third phase of the book’s argument demonstrates the outgrowths of those historical roots, in the form of the neoconservatives’ “esoteric” teachings, the ones they discuss among themselves. For students of philosophy and its effect on history, chapter 7 (“The World According to the Neocons”) is the key section of the book. It explains the neoconservative philosophy, branch by branch.

The most fundamental branch is metaphysics, which examines the basic nature of the world. The authors explain that Strauss adopts Plato’s scheme of two realms: the “true reality . . . a supernatural world of the Forms . . . which are perfect” and unchanging; and “the material world in which men actually live . . . an imperfect, ever-changing realm” that is only an inferior reflection of the superior world (p. 95). . . .

View all articles by Burgess Laughlin →
Letter to the Editor
Review: Nothing Less than Victory, by John David LewisReview: The Passion of Ayn Rand’s Critics, by James Valliant
Return to Top