Review: The Flaw of Averages, by Sam L. Savage 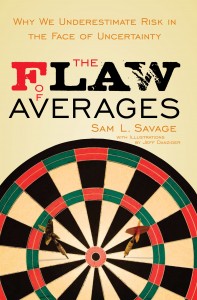 This is an example of the danger of the “Flaw of Averages,” Sam Savage’s term for the common mistake of “representing an uncertain number by its average” (p. 59). “Plans based on average assumptions are wrong on average,” he explains. “In everyday life, the Flaw of Averages ensures that plans based on the average customer demand, average completion time . . . and other uncertainties are . . . behind schedule, and beyond budget” (p. 11, emphasis original). In The Flaw of Averages, Savage demonstrates the harm caused by the error and arms his readers with skills to avoid it.

Toward helping the reader understand the concepts of probability and statistics needed to grasp the Flaw, Savage uses a radically different approach than is typically used in college statistics courses. He begins by describing the motion of a bicycle with a series of differential equations, thereby leading the reader to believe that such mathematical formalities are in store for him throughout the book.

Savage dispenses with the mind-numbing equations in favor of graphs and whimsical illustrations (many by syndicated cartoonist Jeff Danziger). Savage also provides, via a free companion website (www.flawofaverages.com), animations and simulations that allow the reader to generate data dynamically. In one simulation, for example, the viewer clicks on two spinners to generate random numbers and observes a histogram of their sum gradually take on the infamous “bell curve” shape. Further, Savage simplifies the discussion through his use of plain English or what he calls “Green Words” rather than technical terms or “Red Words” (p. 45–46). He asks the reader to think in simple terms such as “interrelationships,” “degree of uncertainty,” and “upward and downward curves” rather than “covariance,” “variance/standard deviation/sigma,” and “convex and concave functions.” Savage also concretizes his points with an engaging mixture of simplified hypothetical examples and real-world applications from his work as a consultant. In one case, for instance, he employs details from his work with Shell Oil, in which he showed the company how to determine which combinations of exploration projects would be most profitable. Through these and other means, Savage succeeds in making complex statistical concepts accessible to the general reader. . . .

View all articles by David H. Mirman →
Review: How an Economy Grows and Why It CrashesTo Help Save America, Tea Partiers Must Fully Embrace Individual Rights

*A “short position” in a stock is held when one borrows shares from their owner and sells them at the current market price in the expectation that the share price will decline. If it does, the borrower may buy the shares at the new lower price and return them at a profit. However, if the shares appreciate, the borrower still owes the shares to their lender, and if he buys them at the new higher price, he will incur a loss.