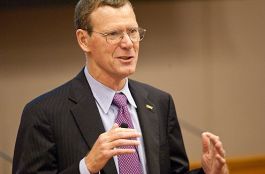 I recently spoke with Professor John Allison about his efforts and successes in creating pro-capitalist programs in American universities. Professor Allison was the CEO of BB&T for twenty years, during which time the company’s assets grew from $4.5 billion to $152 billion. He now teaches at Wake Forest University. —Craig Biddle 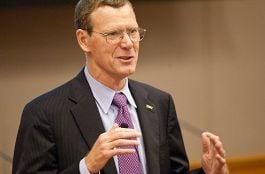 Craig Biddle: Hello, John, and thank you for joining me.

John Allison: It is a pleasure to be with you.

CB: Let me begin with a couple of questions about your work at Wake Forest. I understand that you joined the faculty in March 2009 as a Distinguished Professor of Practice—a fitting title given your decades of applying philosophy to business. What has your work at the university entailed so far? And how have your ideas been received?

JA: I’ve primarily been involved in teaching leadership both to students and to some of the administrators in the university. I taught a course on leadership last fall, and I’ve been participating in various courses taught by other professors on finance, mergers and acquisitions, and organizational development. But my focus is on leadership.

My ideas have been well received. The students take great interest in talking to someone who has been in the real world and been successful in business. I think they appreciate that perspective.

CB: Through the BB&T Charitable Foundation, you’ve established programs for the study of capitalism at a number of American universities. How many of these programs are there now? What unifies them? And what generally do they entail?

JA: BB&T has sponsored sixty-five programs to date, and they’re all focused on the moral foundations of capitalism. While many people recognize that capitalism produces a higher standard of living, most people also believe that capitalism is either amoral or immoral. Our academic question is: How can an immoral system produce a better outcome? We believe that capitalism is moral and that this is why it is so successful. We think it is critically important that we not only win the battle over economic efficiency, but that we engage in and win the debate over ethics as well. . . .

View all articles by Craig Biddle →
Letter to the Editor
A Prescription for America’s Health Care IllsThe British Industrial Revolution: A Tribute to Freedom and Human Potential
Return to Top