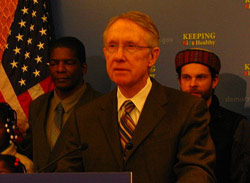 "Social Security is the most successful social program in the history of the world," says Harry Reid, the Democratic senator of Nevada. Investors Business Daily replies:

Successful? A program that socks future generations with trillions in higher taxes and lower standards of living? A program that's already running in the red and whose unsustainable finances promise to push the U.S. to the verge of bankruptcy?

Investors Business Daily is of course correct. By any fiscal standard, Social Security has been an abject failure. But what the IBD editorial staff misses is that politicians such as Reid are not concerned with that standard. They are concerned with a moral standard—specifically that of altruism, the idea that being moral consists in self-sacrificially serving others.

To those who embrace altruism, Social Security must be regarded as successful. Why? Because Social Security, like all welfare programs, demands sacrifice. It forces some Americans to sacrifice for the sake of others, enshrining in law the view that no man has a right to exist for his own sake. This is why individuals such as Reid love it—no matter the consequences for America.

View all articles by Daniel Wahl →
Happy Birthday, Ayaan Hirsi Ali!The Right to Immigrate and the Legitimacy of an Objective Screening Process
Return to Top