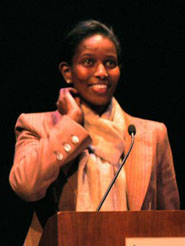 On this day in 1992, a young Muslim woman stood on a train platform with only a duffel bag, a tenacious spirit, and an active mind. These were all she needed now.

Before she wrote a best-selling autobiography, the stories of her childhood would have sounded as foreign to Westerners as her name, Ayaan Hirsi Ali. From the moment she could speak, she was taught to obey authority without question, to honor her parents no matter what, and to remember her second-class position as a woman.

The horrific nature of the Islamic culture into which Ayaan was born can be concretized in a single event from her childhood. In order to eliminate the possibility of sexual pleasure and to preserve her virginity for the husband her parents would later choose, her elders subjected her to a form of hell on earth. As Ms. Ali explains, “There is no other way to describe this procedure. . . . After the child’s clitoris and labia are carved out, scraped off . . . the whole area is often sewn up, so that a thick band of tissue forms a chastity belt made of the girl’s own scarred flesh.”

Fortunately, while growing up in Kenya, Ayaan attended a colonially-influenced school and learned of a different kind of culture—one where girls were not mutilated but venerated; where independence, not blind obedience, was prized; and where a woman was free to pursue her own life in her own way.

Now, standing on this train platform, she faced a choice. Her parents had arranged for her to marry a Muslim. That meant a life of submission not only to the dictates of Mohammed and the community but also to those of an unchosen husband. Her only alternative was to run away and start a new life somewhere else.

Ayaan got on the train and marked the date: July 24, 1992. Of this day, she later wrote: “Every year, I think of it. I see it as my real birthday: the birth of me as a person, making decisions about my life on my own.”