Did Obama Ask the SEC to Assault Goldman Sachs? 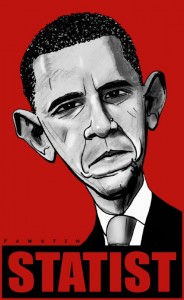 In a previous blog post I showed how the Securities and Exchange Commission has wielded power, assaulted businesses, and ignored fraud. Now it appears that the SEC colluded with the Obama administration to assault Goldman Sachs, boost the administration’s chances of passing the financial “reform” bill, and line the coffers of Obama’s reelection campaign. Quoting the Washington Examiner:

It seemed a little odd last week when the Securities and Exchange Commission settled its lawsuit against Goldman Sachs within two hours of Senate passage of the Democrats' Dodd-Frank financial reform bill. After all, who could ask for a more perfect backdrop than a successful prosecution of the investment colossus of Wall Street and a prime mover in the economic crisis of 2008? But this one looks stranger still considering that the SEC action was announced on April 15 of this year, only a week before the legislation was brought before the Senate, thus neatly bookending debate on the proposal. And it gets even stranger. On the same April 15, President Obama's campaign organization, Organizing for America, purchased a Google ad directing people who Googled "Goldman Sachs SEC" to donate money at my.barackobama.com.

Whether or not evidence of collusion in this case is conclusive, the sad fact is that there is no reason to put such corruption past the SEC or this administration. Fortunately, as John David Lewis has argued, the brazen evil of Obama and company is providing a kind of political clarity that could lead Americans to see that our alternatives really are capitalism or statism.