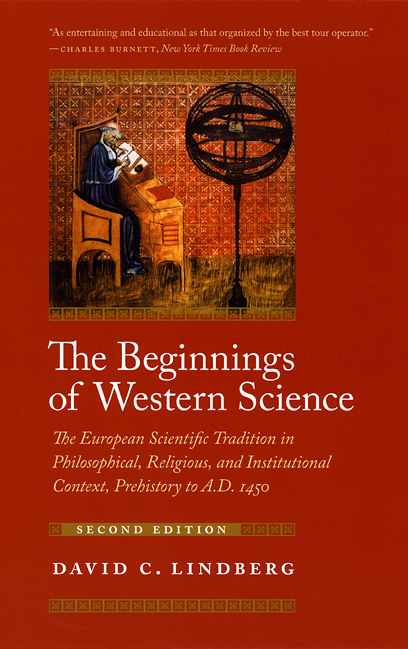 Review: The Beginnings of Western Science, by David C. Lindberg 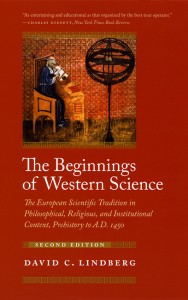 When we think about the history of science, we usually think of figures such as Copernicus, Galileo, Newton, and others who contributed to Europe’s Scientific Revolution of the 16th and 17th centuries. But these giants built on still earlier achievements. The history of science stretches much further back in time—more than a millennium—to the ancient Greeks of the Classical and Hellenistic world. Following its birth in ancient Greece, science was preserved, developed, and extended by Roman, Arab-Islamic, and medieval Christian thinkers.

Professor David C. Lindberg’s The Beginnings of Western Science, now in its second edition, is a great overview of this exciting story, told clearly and with great attention to historical detail. The book’s theme is that “the ancient and medieval periods were the scene of impressive scientific achievements, which provided a solid foundation for scientific developments of the sixteenth and seventeenth centuries and beyond” (p. xv).

The book presents the various ideas men have accepted over time about the natural world around them, as well as the reasoning behind these ideas. It presents their theories about the grand structure of the world, the fundamental stuff that the world is made of, the causes of motion, the nature of plants and animals, the structure and functioning of the human body, and the nature of health and disease. But it does not merely present these theories; it also places them in historical context, showing how they related to philosophy, how they were applied to practical uses, how they were taught, how they were transmitted from one culture to another, and how they were altered and extended over time.

At the outset of the book, in a particularly strong section, Lindberg discusses the intellectual achievements of the ancient Greeks, from which science as we know it was born. Earlier cultures such as the Egyptians and the Mesopotamians systematically observed the sky and developed systems of calculation and even astronomical prediction. But throughout these non-Greek cultures, Lindberg points out, thought about nature was intimately linked to gods, magic, and mysticism. The birth of science required a fundamental philosophic shift: a turn away from the gods as explanatory devices and toward an understanding of natural causes—a turn that began with the earliest Greek philosophers, such as Thales, Anaximander, and Anaximenes.

The world of the philosophers, in short, was an orderly, predictable world in which things behave according to their natures. The Greek term used to denote this ordered world was kosmos, from which we derive our word “cosmology.” The capricious world of divine intervention was being pushed aside, making room for order and regularity; chaos was yielding to kosmos. A clear distinction between the natural and the supernatural was emerging; and there was a wide agreement that causes (if they are to be dealt with philosophically) must be sought only in the natures of things (p. 27). . . .

Frederick Seiler holds an MA in the history of science from Indiana University and degrees in electrical engineering from Rensselaer Polytechnic Institute and Carnegie Mellon University. He currently works as an engineer in northern Virginia, and is writing a book about the conflict between science and religion.

View all articles by Frederick Seiler →
Letter to the Editor

Review: Freethinkers, by Susan JacobyReview: The Greatest Trade Ever, by Gregory Zuckerman
Return to Top