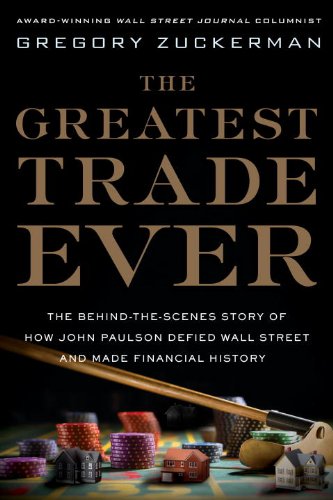 Review: The Greatest Trade Ever, by Gregory Zuckerman 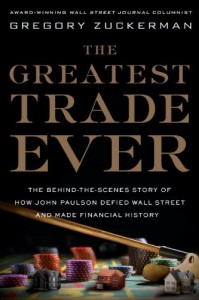 The story of lost fortunes and foreclosed homes in the most recent financial crisis is well known. Less known is the story Gregory Zuckerman tells in The Greatest Trade Ever: The Behind-the-Scenes Story of How John Paulson Defied Wall Street and Made Financial History. The book recounts how, prior to the economic collapse, Paulson and a handful of other investors recognized that certain financial assets were dramatically mispriced and adjusted their investments accordingly.

Paulson, the main focus of the book, placed a concentrated bet against risky mortgages that would become the “biggest financial coup in history, the greatest trade ever recorded” (p. 1). Zuckerman provides just enough of Paulson’s background to give readers a sense of who he is and how he got to be where he was in 2001, when the central story began. Zuckerman tells of Paulson breaking apart a pack of Charms candies and selling them to his kindergarten classmates for a profit (p. 17); earning huge commissions on sales of flooring from Ecuador while on a break from university (p. 21); learning to spot investments that “had limited risk but held the promise of a potential fortune” (p. 30); making an investment in a start-up brewery that would produce the Samuel Adams brand and earn him several million dollars (p. 30); giving up the parties that had distracted him for years in order to focus on managing his own hedge fund (p. 32); and marrying the woman he loves (p. 38).

By 2001, “Paulson was on . . . solid footing in his personal life. And his fund had grown as well. He managed over $200 million and had refined his investment approach.” Wall Street still did not think much of Paulson, however. “He wasn’t on anyone’s radar screen,” says one of Paulson’s friends. “But something remarkable was about to happen to the nation and to the financial markets,” writes Zuckerman, “an upheaval that would change the course of financial history and transform John Paulson from a bit player into the biggest star in the game” (p. 38).

Zuckerman relays the essential sequence of events: “The key federal-funds rate, a short-term interest rate that influences terms on everything from auto and student loans to credit-card and home-mortgage loans, would hit 1 percent by the middle of 2003, down from 6.5 percent at the start of 2001” (p. 39). This led to a surge in home sales and, consequently, in home prices. “As home prices surged, banks and mortgage-finance companies . . . felt comfortable dropping their standards, lending more money on easier terms to higher-risk borrowers” (p. 41). Speculative homebuyers, eager to profit from rising prices, “often asked for loans much larger than they could afford” (p. 49). Politicians “pushing for wider home ownership” egged on Fannie Mae and Freddie Mac to step up their purchases of such mortgages (p. 46). Ratings agencies “blessed the pools of loans with top ratings” while being paid well for it (p. 48). And banks such as Lehman Brothers “were eager to buy as many mortgages as they could get their hands on” in order to create new investments for sale to leveraged investors worldwide (p. 46).

While this was happening, writes Zuckerman, Paulson was becoming more and more confident in his investing skills, and this was reflected in the ever-increasing concentration of his investments (p. 54). His fund was also growing, such that by 2004 he was managing $1.5 billion (p. 55). . . .

View all articles by Daniel Wahl →
Letter to the Editor
Review: The Beginnings of Western Science, by David C. LindbergReview: That First Season, by John Eisenberg
Return to Top