How to Stand with Stone and Parker - The Objective Standard
Philosophy,  Politics & Rights

How to Stand with Stone and Parker 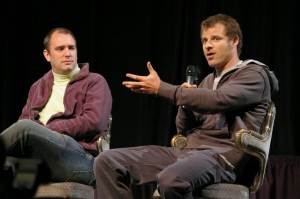 Following thinly-veiled death threats by a Muslim group against Trey Parker and Matt Stone (the creators of South Park) for portraying Mohammed dressed as a bear in a cartoon, Anderson Cooper interviewed the author of Infidel, Ayaan Hirsi Ali.

I grew up as a Muslim [said Ali] and growing up as a Muslim I learned you don’t criticize Allah, the Koran, or the prophet Muhammad, and you should participate in condemning and eventually killing anybody who does. That is just what the religion tells us; that’s what scripture tells us.

Ali then responded to the threats properly:

It is an assault on the freedom of expression and we have to defend it tooth and nail. That means we all stand by Mr. Stone and Mr. Parker. . . . And [it] means scrutinizing Islam, criticizing it, in the same way that we criticize Christianity [or] Judaism.

But what properly is the essence of such a criticism? Is religion—any religion—compatible with free speech? Can one worship “God” and free speech too? Craig Biddle tackles these questions in “Religion vs. Free Speech.” Summing up his argument, he writes:

The tenets of religion are incompatible with the right to free speech. The only way to mix the two in one’s mind is to take neither of them seriously. But not taking religion seriously does not change what religion is or says or means. And not taking freedom of speech seriously does not alter the fact that it is a fundamental requirement of human life.

The right to free speech is the recognition of the fact that in order for people to live together peacefully, they must be free to express their thoughts—regardless of what others think, feel, or “just believe.” We need freedom of expression; and to establish and maintain it, we must repudiate religion and embrace the rational foundation for rights.

If we fail to challenge the growing threat to freedom of speech at the most fundamental level, we will lose the freedom to express our ideas—which means, we will lose our ability to live as civilized human beings. In order to disarm those who attack the right to free speech, we must identify religion—all religion—as what it is: illogical, invalid, inhuman, and immoral.

To learn why standing unequivocally with Stone and Parker requires challenging not only Islam but religion as such, read the whole thing.

View all posts by Daniel Wahl →
More Clarity from the Obama Administration?The Government May Soon Control All Waters
Return to Top