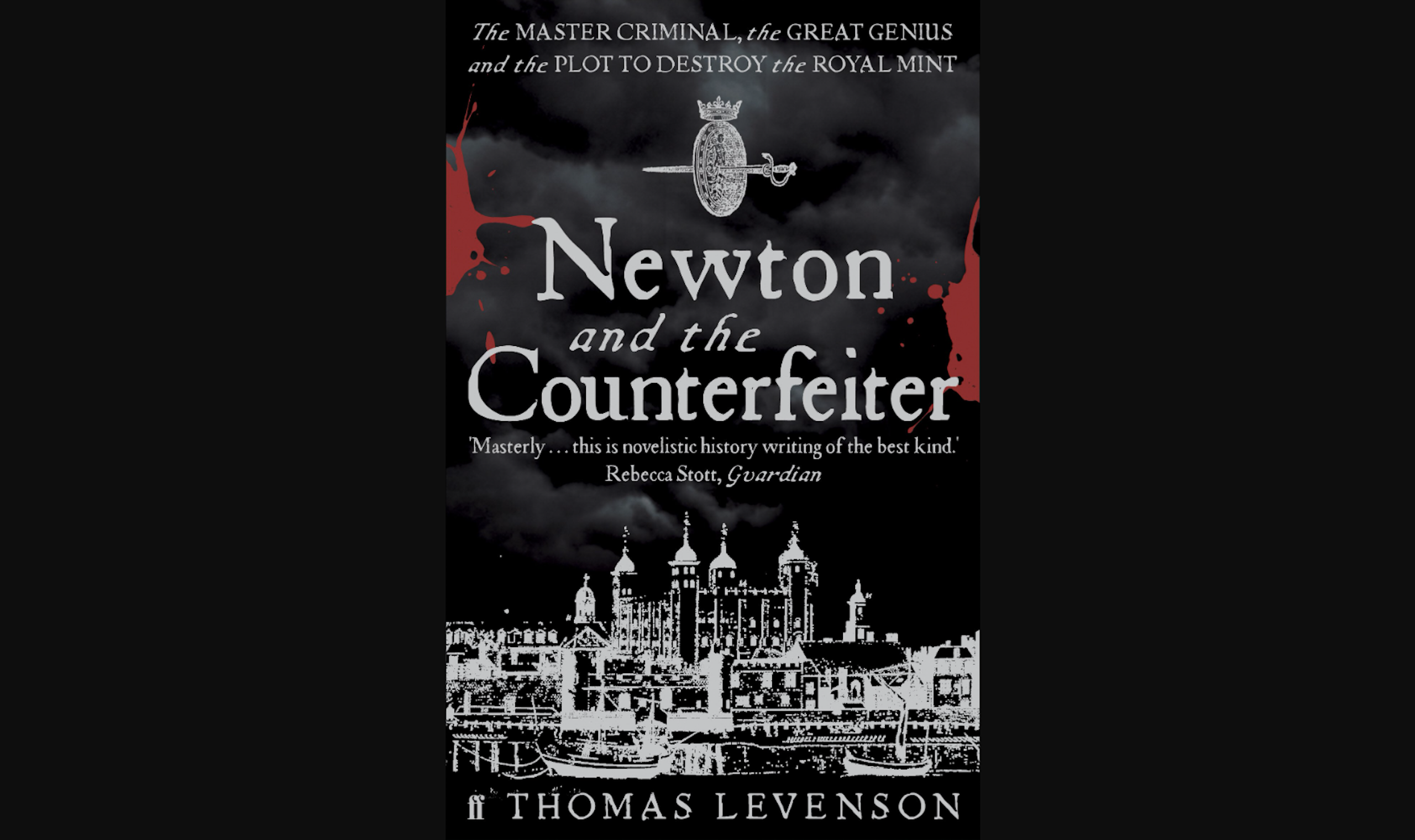 Review: Newton and the Counterfeiter by Thomas Levenson 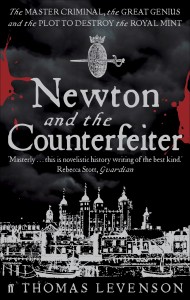 Isaac Newton sought “to master all the apparent confusion of the world, to bring order where none was apparent” (p. 5). He had, as Thomas Levenson shows, a “legendary capacity for study”; and for him frequently “sleep was optional” (p. 9). He was absolutely brilliant. Yet “for all his raw intelligence,” Levenson says, “Newton’s ultimate achievement turned on [the fact that if] something mattered to him, the man pursued it relentlessly.”

Equally crucial to his ultimate success, Newton was never a purely abstract thinker. He gained his central insight into the concept of force from evidence “known by [the] light of nature.” He tested his ideas about gravity and the motion of the moon with data drawn from his own painstaking experiments and the imperfect observations of others. When it came time to analyze the physics of the tides, the landlocked Newton sought out data from travelers the world over (p. 20).

By 1695, at the age of 51, Newton had been at “the leading edge of discovery” for almost three decades (p. 104). He had, as Levenson shows, discovered calculus—“the essential tool used to analyze change over time” (p. 14), and he had “presented gravity as the engine of the system of all creation—one that binds the rise and fall of the Thames . . . to all the observed motions of the solar system” (p. 30).

And then “an odd message arrived from London . . . on a matter completely outside his usual competence” (p. 105). The letter, sent by Secretary of the Treasury William Lowndes, solicited Newton’s opinion on the worsening shortage of silver coins, a matter of national importance. This unexpected correspondence would ultimately lead to Newton becoming warden of the Mint—and, as such, both an industrialist and a criminal investigator. Levenson tells the exciting story that follows in Newton and the Counterfeiter: the Unknown Detective Career of the World’s Greatest Scientist.

The problem facing England was that from “the late 1680s to the mid-1690s, the supply of [silver] coins—the basic units of exchange for the daily business of the country—shrank year by year.” “By 1695,” Levenson says, “it was almost impossible to find legal silver in circulation” (p. 109). This led to a standstill in trade, tenants that could not pay rent, many suicides, and a “general sense of terror” that violence would soon erupt (p. 138). . . .

The fundamental cause of this problem, as Levenson points out, was that “silver was worth more as bars of metal than the Mint said it was as crowns or shillings” (p. 113). Thus, “there was no shortage of clever operators who figured out the arbitrage opportunity: collect silver coins in England, melt them down into ingots, ship them across the Channel, buy gold, and then use that gold to buy yet more silver back home” (p. 110).

Two less-fundamental problems also contributed to the situation. England had older, hand-struck and debased coins printed with the same face value as newer, much heavier, machine-made ones—which immediately vanished from circulation. “Bad money,” observes Levenson, “was driving out good” (p. 111). In addition, the mid-1690s were “the golden age of English counterfeiting”—“more than one in every ten coins in circulation was a fake” (p. 122).

Ignoring Newton’s solution to the problem—which was to let the market set the value of minted money and thereby eliminate the incentive to melt or export it—Parliament opted to embark on a complete recoinage, which would create new coins that were harder to counterfeit while retaining the old weights. Isaac Newton, as the new warden, would have to make it happen before angry citizens turned into an angry mob.

Newton’s first task was “to ramp up production to between 30,000 and 40,000 pounds [of coins] a week”—from the usual 15,000. According to “a clerk assisting in the recoinage,” this was “a thing impossible” (p. 142).Newton did notseemworried, however, and set to work. Levenson shows Newton immersing “himself in paper and in meetings, making the decisions no one else could or would,” demanding that “the work of carpenters and laborers [actually be checked] before paying their bills” (pp. 139–40), and identifying the perfect pace for “men and machines [to] stamp outcoins for hours at a time” (p. 142).

More to the point, Newton quickly committed himself to mastering the details of every operation taking place in the Mint. . . . He read up on the history of the Mint, tracing the records back more than two hundred years. He meticulously worked through decades of account books, annotating them in his own hand. He brought the rigor instilled by decades of painstaking laboratory work to bear on every step taken to turn raw metal into legal tender. He got his hands dirty as a matter of principle. As he told his deputies, his rule was to trust no other man’s calculations, “nor any other eyes than your own” (p. 140).

“By the end of the summer the impossible had become routine” (p. 141). “Under Newton’s control, the presses were turning out 50,000 pounds a week,” and, says Levenson, “the fears that had seemed almost overpowering . . . disappeared from the record of public concern as the recoinage wended its way to a quiet, competent end” (pp. 143, 144).

In Levenson’s account, however, Newton’s task was only half done. As warden, Newton was also “responsible for enforcing the King’s law in and around London for all crimes committed against the currency” (p. 147). This meant the world’s greatest scientist “had to turn himself into a detective” (p. 148). Like his proposed solution to let the market settle the issue of waning coin supplies, Newton’s strategy for breaking “the threat of counterfeiting” was focused on root causes. His goal, Levenson shows, was to “capture and convict major players” (p. 159).

Levenson’s account focuses primarily on Newton’s pursuit of a counterfeiter named William Chaloner. An audacious scoundrel, Chaloner raised the seed money for one counterfeiting operation by framing two printers for sedition—receiving in return “one thousand pounds from a grateful Crown and government” (p. 73)—and authored a booklet: Proposals Humbly Offered, for Passing, an Act to Prevent Clipping and Counterfeiting of Money (p. 125).

He even swore before Parliament that the “Warden of the Mint is a rogue” who had sold coining dies to a counterfeiter named Mr. Chandler—“a name,” Levenson points out, “known in the right sort of circles as [his own] coining pseudonym” (p. 149). And when first questioned about counterfeiting, Chaloner proclaimed his innocence and then proceeded to recommend that a friend of his “serve as supervisor” to Newton at the Mint (p. 155).

Eager to get inside the Mint himself—and thus get his coins into the marketplace without the need of confederates—Chaloner gave parliamentary investigators a sample of his own die work, which he claimed could not be counterfeited,and offered to help the Mint to improve its operations. This, Levenson notes, “was classic Chaloner”—“with his own hand, he gave Parliament the proof that he could at will commit what was, after all, a capital crime” while at the same time implying that “the incompetents at the Mint could not outthink a mere blacksmith.” This implication, says Levenson, was “missed by no one—certainly not Isaac Newton” (pp. 172–73).

Incensed, Newton wrote “page after page of draft rebuttals . . . in furious script [with] great gobs of ink blotted here and there.” But Newton published nothing. Instead, “he waited and watched, he and his agents, eyes and ears open all across London” (p. 175). Although Newton certainly noted all testimony relevant to Chaloner that came his way, he did not wait passively for information. “[At] first concentrating on quantity rather than quality,” Levenson shows Newton taking countless depositions. Of these, Levenson says:

Some implicated Chaloner, some did not, but Newton was accumulating a picture of London’s coining ecosystem. He was gathering names and noting the links, the web of criminal connections within which Chaloner himself had to move. Over the months, more and more of the people to whom those names attached turned up in their own depositions. . . . Those scattered references led to more witnesses, and then to yet more—a scaffolding of information received on which Newton planned to hang William Chaloner (p. 205).

In the end, Newton gathered enough information to convict Chaloner.

In the end, Newton gathered enough information and convicted Chaloner. Due to flaws in Newton’s legal case, however, Chaloner should have walked away on a technicality. After Chaloner’s attempt to defend himself on that basis failed, he was reduced to writing letters to Newton begging for mercy. But Chaloner’s letters, according to Levenson, were merely “an attempt through sheer weight of words to force Newton to accept what Chaloner wished to be true,” that he was innocent (p. 217). Legal technicalities aside, Newton did in fact have sufficient proof of Chaloner’s guilt, and he knew it. Dismissing Chaloner’s arbitrary claims just as he would such claims in the field of science, “Newton did not choose to reply” to the letters, and Chaloner was executed for his crimes (p. 219).

Throughout the book Levenson points out that Newton’s method remained the same whether he wasacting asascientist,an industrialist, or a detective. Unfortunately, such useful commentary is offset by the inclusion oftenuously related or unconnected material—such as discussions regarding whether Newton and another alchemist were lovers (p. 101) or whether Newton pursued Chaloner more intensely given Chaloner’salchemical history (p. 191). Such unanswerable and pointless offshoots needlessly inflate the book’s length and distract the reader from a story that is fascinating in its own right: how the world’s greatest scientist tackled problems of commerce and crime.

View all articles by Daniel Wahl →
Letter to the Editor
Review: Your Inner Fish, by Neil ShubinGeorge and Sharlee McNamee Fight to Keep Their Own Back Yard
Return to Top