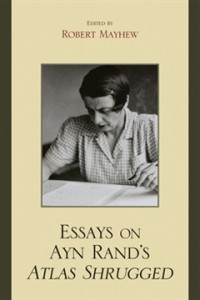 Since it was first published in 1957, Ayn Rand’s Atlas Shrugged has sold more than seven million copies. Remarkably, in that time, the popularity of the novel has actually grown, and, over the past couple of years, due to the parallels between the story and recent events, sales have skyrocketed. In 2009 alone, Atlas sold more then a half million copies. And now a new resource is available for the novel’s legion of fans: Essays on Ayn Rand’s Atlas Shrugged,edited by Robert Mayhew.

In “The Part and Chapter Headings of Atlas Shrugged,” Onkar Ghate indicates why such a collection is of value to fans of the novel: “At over a thousand pages long and dealing with the fate of a civilization, Atlas Shrugged is a story of incredible scope and complexity.”

Its theme is the role of man’s reasoning mind in achieving all the values of his existence. Its plot is driven by a central question, a seeming contradiction: If the men of the mind are the creators and sustainers of man’s life, why do they continually lose their battles and witness their achievements siphoned off and destroyed by men who have abandoned their minds? The story focuses on how the men of the mind learn to ask and to answer this question, thereby putting a stop to their own exploitation.

To resolve the apparent contradiction demands of the heroes a ruthless commitment to logic: to identify the problem, learn its fundamental cause, and grasp the path to its solution. To liberate themselves, the men of the mind must discover, understand, and then practice a new set of philosophical principles. And for we as readers to really appreciate the story’s progression, the same exacting logical focus is demanded of us (p. 1).

Assuming “familiarity with the events of each part and each chapter,” Ghate highlights “how the part and chapter headings help integrate those events and thus enable [readers] to gain a deeper understanding of the story and its meaning” (p. 2).

Gregory Salmieri presents two essays (either of which could be reason enough to purchase the book) elucidating the theme of the novel, which Rand specified as “the role of the mind in man’s existence” (p. 219), and discussing how the novel constitutes “the demonstration of a new moral philosophy” (p. 398). . . .

View all articles by Daniel Wahl →
Letter to the Editor
Review: Capitalism Unbound, by Andrew BernsteinReview: The Sparrowhawk Series, by Edward Cline
Return to Top