Review: Why Are Jews Liberals? by Norman Podhoretz 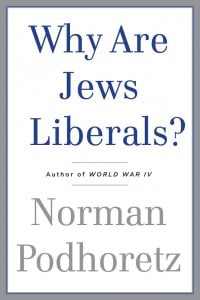 Norman Podhoretz, Jewish neoconservative and former editor-in-chief of Commentary magazine, attempts in his book Why Are Jews Liberals? to answer the perplexing commitment of American Jews to modern liberalism. Jews, according to Podhoretz, violate “commonplace assumptions” about political behavior, such as that “people tend to vote their pocket books”; they “take pride . . . in their refusal to put self-interest . . . above the demands of ‘social justice’”; and they have consistently sided with the left in the “culture war” (pp. 2–3). According to statistics cited by Podhoretz, 74 percent of Jews support increased government spending and, since 1928, on average, 75 percent have voted for candidates of the Democratic Party.

Such political behavior “finds no warrant either in the Jewish religion or in the socioeconomic condition of the American Jewish community” (p. 3), argues Podhoretz; it can be explained only by realizing that Jews are treating liberalism as a “religion . . . obdurately resistant to facts that undermine its claims and promises” (p. 283).

Podhoretz traces the prevalent political orientation of present-day Jews to conditions suffered by their Jewish ancestors in medieval Europe and later in the United States. During the Dark and Middle Ages, Christian authorities in Europe placed severe restrictions on Jews, including where they could live and what professions they could practice. In later centuries, as the influence of Christianity declined, liberal revolutions swept much of the European continent, and, in the 19th century, Western European governments began recognizing the rights of Jews and treating them as equal under the law (p. 57). Even so, conservative Christians, who still supported the monarchies, remained opposed to the “emancipation” of the Jews (pp. 55–57). Consequently, Jews entered politics in Europe almost exclusively as liberals, in opposition to the Christian right that had oppressed them and their ancestors (pp. 58–59).

Governments in Eastern Europe and Russia, however, continued to persecute Jews well into the early 20th century (pp. 65–67), and, between 1881 and 1924, two million Jews immigrated to America, where they would be treated equally before the law. Most were poor, and few ventured out of Lower East Side Manhattan, where the majority found jobs in the textile industry, working more than sixty hours a week for low wages, and where even “modest improvements in their condition” were achieved only by the efforts of a Jewish labor movement (pp. 99–100).

According to Podhoretz, the initial leadership of the Jewish labor movement in early 20th-century America consisted of Marxist Jews “who had brought their ideological convictions from Russia to America” (p. 100). To them, “labor unions were a weapon in a war whose ultimate objective was the overthrow of capitalism,” and they “regarded collective bargaining as a form of collaboration with the enemy” (p. 100). . . .