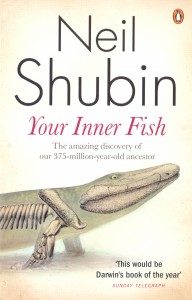 In 2006, Neil Shubin made history when he announced his discovery of a “missing link”: a new fossil species showing characteristics that bridge the evolutionary gap between two different types of organisms. He named it Tiktaalik.

[F]or me the greatest moment of the whole media blitz was . . . at my son’s preschool. . . . The first child said it was a crocodile or an alligator. When queried why, he said that like a crocodile or lizard it has a flat head with eyes on top. Big teeth, too. Other children started to voice their dissent. Choosing the raised hand of one of these kids, I heard: No, no it isn’t a crocodile, it is a fish, because it has scales and fins. Yet another child shouted “Maybe it is both.” Tiktaalik’s message is so straightforward even preschoolers can see it (p. 25).

Your Inner Fish seeks to reveal the evolutionary history of humans as we travel down the branches of our family tree toward its trunk, passing fossils such as Tiktaalik and finding our “inner fish” along the way.

Shubin makes this story accessible by maintaining a tight focus on the essentials of each topic while minimizing his use of technical terms. He uses analogy well in clarifying points; for instance, he compares the complexity of a smell made of many molecules to a musical chord made of many notes (p. 141), and compares the function of an inner ear bone to a plunger (p. 158). And he generally makes effective use of humor; for example, of searching for fossils, he writes: “Volcanic rocks are mostly out. No fish that we know of can live in lava” (p. 10). On waiting for monthly shipments of rare eggs for embryological research: “We became a virtual cargo cult as we waited” (p. 56). And on the alignment of teeth in mammals: “A mismatch between upper and lower teeth can shatter our teeth, and enrich our dentist” (p. 61). His droll style even affects some of his chapter titles, such as “Handy Genes” for the chapter on genetics of hand development, and “Getting Ahead” for the chapter on the head.

The book is extensively illustrated, including a reproduction of the map in a geology textbook that led Shubin to the site where he discovered Tiktaalik (p. 16), photos and drawings of the Tiktaalik fossil (pp. 23 and 24), a drawing comparing the gill arches of a human fetus to the adult structures derived from them (p. 88), and a figure showing the similarities between the cranial nerves of sharks and of humans (p. 92). There are forty-five figures (in a book of just 201 pages), most of which are line drawings commissioned specifically for the book, and they substantially aid the text in conveying the elements of each subject. . . .

View all articles by David H. Mirman →
Letter to the Editor
Review: Born to Run, by Christopher McDougallReview: Newton and the Counterfeiter by Thomas Levenson
Return to Top