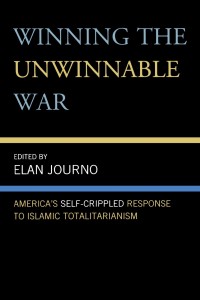 In Winning the Unwinnable War, editor Elan Journo and fellow contributors Yaron Brook and Alex Epstein consider the ideas and events that led to 9/11 and analyze America’s response. Arguing that our nation has been made progressively less secure by policies based on “subordinating military victory to perverse, allegedly moral constraints” (p. ix), they offer an alternative: grounding American foreign policy on “the moral ideal of rational self-interest” (p. 188). This they accomplish in the space of seven chapters, divided into three sections: “Part One. The Enemy,” “Part Two. America’s Self-Crippled Response to 9/11,” and “Part Three. From Here, Where Do We Go?”

In Part One, in a chapter titled “What Motivates the Jihad on America,” Journo considers the nature of the enemy that attacked America on 9/11. With refreshing honesty, Journo dispenses with the whitewashing that often accompanies discussions of Islam and Jihad, pointing out that the meaning of “Islam” is “submission to Allah” and that its nature “demands the sacrifice of not only the mind, but also of self” (p. 33). Says Journo, the Jihadists seek to impose Allah’s will—Islamic Law—just as Islamic teaching would have it: by means of the sword. “Islamic totalitarians consciously try to model themselves on the religion’s founder and the figure who is held to exemplify its virtues, Muhammad. He waged wars to impose, and expand, the dominion of Islam” (p. 35).

In “The Road to 9/11,” Journo summarizes thirty years of unanswered Jihadist aggression, beginning with the Iranian takeover of the American embassy in Tehran in 1979. Throughout, Journo criticizes the idea that influenced the actions of America’s leaders during this time—“realism”—which he describes as eschewing “[m]oral ideals and other broad principles” in favor of achieving narrow, short-range goals by sheer expediency (p. 20). Because of the nature of their own ideas, says Journo, realists are incapable of understanding the Jihadists and thus incapable of understanding how to act with respect to them. “The operating assumption for realist policymakers is that (like them) no one would put an abstract, far off ideal ahead of collecting some concrete, immediate advantage (money, honor, influence). So for realists, an enemy that is dedicated to a long-term goal—and thus cannot be bought off with bribes—is an enemy that must remain incomprehensible” (p. 21). Journo indicates how realism was applied to the Islamist threat in the years leading up to 9/11:

Facing the Islamist onslaught, our policymakers aimed, at most, to manage crises with range-of-the-moment remedies—heedless of the genesis of a given crisis and the future consequences of today’s solution. Running through the varying policy responses of Jimmy Carter, Ronald Reagan, George H.W. Bush, and Bill Clinton there is an unvarying motif. . . . Our leaders failed to recognize that war had been launched against us and that the enemy is Islamic totalitarianism. This cognitive failure rendered Washington impotent to defeat the enemy. Owing to myopic policy responses, our leaders managed only to appease and encourage the enemy’s aggression (p. 6).

After 9/11, President George W. Bush shied away from the realist policy of passively reacting to the ever-escalating Islamist threat—and instead adopted the foreign policy favored by neoconservatives. “In place of ‘realism,’ neoconservatives advocated a policy often called ‘interventionism,’ one component of which calls for America to work assertively to overthrow threatening regimes and to replace them with peaceful ‘democracies’” (p. 118). Two chapters of Winning the Unwinnable War are devoted to dissecting this policy, “The ‘Forward Strategy’ of Failure” by Brook and Journo (first published in TOS, Spring 2007) and “Neoconservative Foreign Policy: An Autopsy” by Brook and Epstein (first published in TOS, Summer 2007). . . .

Grant W. Jones holds an MA military history and is currently pursuing a PhD in American history at Kansas State University. His dissertation will consider the development of the Fifth Air Force in the Southwest Pacific (General MacArthur's Theater) from 1942 to 1944. Several of his review essays have been published in the Michigan War Studies Review.

View all posts by Grant W. Jones →
Nothing Less than Victory: Now Available!From the Editor, Spring 2010
Return to Top