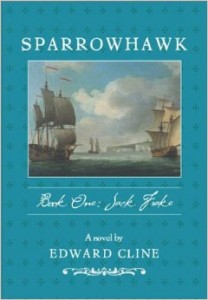 The founding of the United States was among the most dramatic and glorious events in history. For the first time, a nation was founded on the principle of individual rights. Those interested in learning about America’s founding and its cause may turn to history texts. But history texts, even when their content is accurate, tend to be dry accounts of events. They lack the excitement of an adventure novel. Yet most novels set in the Revolutionary period are not good sources of information: Being works of fiction, they may take liberties with historical fact; and they often employ the American Revolution merely as their setting, not as their focus. What if one could find a work that combined the accuracy of a well-researched historical work with the dramatic presentation of a work of fiction? Fortunately, such a combination exists—the Sparrowhawk series of six novels by Edward Cline.

Cline’s purpose in this series is to dramatize America’s founding:

Most nations can claim a literature . . . that dramatizes the early histories of those countries. . . . But, except for a handful of novels that dramatize . . . specific periods of events in American colonial history, America has no such literature. The Sparrowhawk series of novels represents, in part, an ambitious attempt to help correct that deficiency (foreword to Book Three, p. ix).

The series is set in the decades preceding the Revolution, beginning in the 1740s in England and concluding in 1775 in colonial Virginia. Throughout, the books dramatize important events leading up to the war, such as the liberty-constraining acts of British Parliament against the colonies and the colonial response to them.

But Cline’s theme is that the fundamental cause of America’s declaration of independence from Great Britain was not mere events, but certain ideas Americans held. “[D]oing justice . . . to the founding of the United States . . . has meant understanding, in fundamentals, what moved the Founders to speak, write, and act as they did. Those fundamentals were ideas” (foreword to Book Three, p. ix). According to Cline, these fundamental ideas led inexorably to the Revolution: “The juggernaut of Parliamentary supremacy collided with the American colonies’ incorruptible sense of liberty, which could be neither crushed nor flung aside. The result was a spectacular explosion: the American Revolution” (foreword to Book Six, p. 1). . . .

Dina Schein Federman held a PhD in philosophy from the University of Texas at Austin. She taught philosophy at Auburn University and worked for the Ayn Rand Institute’s Archives. She lectured and wrote on topics in ethics, literary analysis, and Ayn Rand’s biography, and has translated Ayn Rand’s Russian writings and Rand’s correspondence with her family.