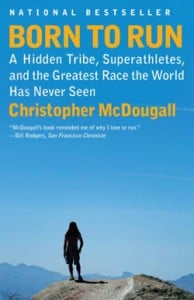 Christopher McDougall’s Born to Run: A Hidden Tribe, Superathletes, and the Greatest Race the World Has Never Seen inspires by showing superathletes running hundreds of miles nonstop across treacherous terrain—and argues that these seemingly superhuman feats can be achieved and enjoyed by practically anyone who excises self-imposed limitations.

Readers first see these superathletes in action in the 1994 running of a brutal “ultra-race” called the Leadville Trail 100. McDougall describes participation in the Leadville 100, high in the mountains of Colorado, as “running the Boston Marathon two times in a row with a sock stuffed in your mouth”—then hiking “to the top of Pike’s Peak”—and then doing it all over again, “this time with your eyes closed.”

That’s pretty much what the Leadville Trail 100 boils down to: nearly four full marathons, half of them in the dark, with twin twenty-six-hundred-foot climbs in the middle. Leadville’s starting line is twice as high as the altitude where planes pressurize their cabins, and from there you only go up (p. 60).

In the 1994 running, a small group of runners from a secretive tribe based in Mexico’s Copper Canyon participated. Called the Tarahumara, they ranged in age from 25 to 42 and ran in sandals, laughing as they left checkpoints more than halfway through the race. They completely dominated the Leadville, finishing first, third, fourth, fifth, seventh, tenth, and eleventh.

The question of how these “stone-age guys in sandals” were able to do it, moreover looking like they were just having fun, has captivated the ultra-running world and McDougall. The explanation McDougall posits was discovered—or, according to the book, rediscovered—by modern doctors, track coaches, anthropologists, and ultra-runners. According to McDougall and the maverick scientists he quotes, we are all born to run, and very long distances at that. McDougall argues that the seemingly superhuman feats displayed by the Tarahumara are achievable by us all if we get rid of barriers that prevent us from doing so, including the modern “junk food” diet and mental limitations with regard to age and sex.

One such barrier, says McDougall, is the modern running shoe. McDougall begins his discussion of running shoes with a blueprint of the human foot, what he calls “a marvel that engineers have been trying to match for centuries.” . . .

View all articles by Daniel Wahl →
Review: The Sparrowhawk Series, by Edward ClineReview: Your Inner Fish, by Neil Shubin
Return to Top