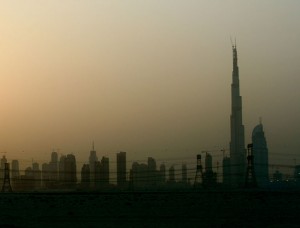 The beginning of the new year and decade bore witness to the opening of the world's newest tallest building: the Burj Dubai in the UAE. Like many other commentators, Landon Thomas of the New York Times noted the dire economic situation Dubai faces as it celebrates this moment of triumph:

All the same, the tower’s success by no means signals a recovery in Dubai's beaten-down real estate market, where prices have collapsed by as much as 50 percent and many developers are having trouble finding occupants for their buildings.

Unlike other commentary, Thomas goes further in noting paradoxes surrounding the spectacle of the opening:

With its mix of nightclubs, mosques, luxury suites and boardrooms, the Burj is an almost perfect representation of Dubai’s own complexities and contradictions. It will have the world’s first Armani hotel; the world’s highest swimming pool, on the 76th floor; the highest observation deck, on the 124th floor; and the highest mosque, on the 158th floor.

When humanity achieves the technical feat of erecting a 2,717-foot skyscraper in the desert and places a mosque on one of its highest floors, one is tempted to reflect on the builders’ hierarchy of values, in this case as expressed by the literal, physical hierarchy of the superstructure. Of greater importance than worldly pursuits to these builders are certain values of the spirit.

But what pursuits of the spirit do a mosque, or a church, or a synagogue represent and encourage? Religious buildings—whether cathedrals or minarets—often feature architecture that reaches for the sky. But everyone knows that the heavens are cold and lifeless. And "reaching for new heights" would be a fitting metaphor to describe religious devotion were it not for the fact that so many religions encourage us to grovel, to submit, to lay down our spirits for the service of a higher power.

What is the human spirit, in the end? Our spirit, if it is anything, is our "glassy essence," what distinguishes us from all other living beings: our rational mind. But the reasoning mind is precisely what religious faith bids us to ignore or abandon. There are still those religious thinkers (mostly obscure figures in the West) who think that God's existence might be proved rationally. But this is not the attitude that motivates the masses or their religious leaders to build monuments to an all-powerful, unseen deity, to which all of their worldly pursuits must be subordinate.

Many have noted the disparity between mankind’s technological and moral progress. Often the example is the invention of advanced weaponry which is subsequently used to slaughter masses of people. But if morality pertains to human flourishing on Earth, and if human reasoning is what enables that flourishing, then war is not the only example of this disparity. The contradictions of the Burj Dubai illustrate it, as well.