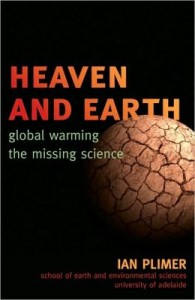 Al Gore, the Weather Channel, “environmental activists,” and many politicians claim there is a worldwide “consensus” among scientists that the earth’s climate is about to change drastically due to human activity. On the basis of this alleged consensus, governments are considering coercive measures to head off catastrophe—rationing fuel, regulating carbon dioxide emissions, dictating the kinds of lightbulbs we can buy, and so on. Of course, the idea that man is responsible for impending climatic doom has its detractors. Some say the science is not settled; some say it is settled, and that human activity is not warming the planet; and some say that even if human activity were warming the planet, that might be good. But who among us truly understands the scientific arguments alleged to support the various claims? Wouldn’t it be nice if a scientist wrote a book carefully documenting and explaining, in layman’s terms, the cases for and against man-made global warming? Then, we could determine for ourselves which claims are supported by evidence and logic.

Based on favorable publicity from conservative media and politicians, Ian Plimer’s Heaven and Earth: Global Warming, the Missing Science would appear to be just such a book. Plimer claims to present an “integrated scientific understanding of the environment,” and the book—chock-full of figures and graphs and containing more than 2,300 footnotes in its 504 pages—certainly makes a powerful first impression. Add to that EU President (and noted climate-change skeptic) Vaclav Klaus’s statement that the work is “clear, understandable, and very useful,” and a good grasp of the arguments for and against man-made global warming would seem to be just a few hundred pages away.

Unfortunately, Heaven and Earth utterly fails to deliver on its promise. Rather than clearly presenting the anthropogenic global warming hypothesis and specifying the kind and scope of data necessary to evaluate it, Plimer presents the reader with a disorganized hash of poorly-presented data; repeatedly mocks climate models without providing sufficient evidence or argument to warrant such mockery; dismisses the Intergovernmental Panel on Climate Change (IPCC) as a bogeyman “unrelated to science” (p. 20), without adequately explaining why this is so; and generally presents an incoherent argument against a straw-man version of the anthropogenic global warming hypothesis.

Plimer does say the theory is false, but he does not address the subject scientifically. His work is sloppy, inconsistent, and frequently self-contradictory. For instance, in discussing a correlation between the Wolf Minimum (a period of low sunspot activity) and the start of a cooler climate, Plimer states that the Wolf Minimum “heralded the end of the Medieval Warming and the beginning of the 600-year Little Ice Age. It took only 23 years to change from a warm climate to a cool climate” (p. 129). But if one checks Plimer’s own dates for the Wolf Minimum (1280–1340 AD, p. 128) against his earlier figure 11 (p. 89), one sees temperature taking at least another century to return to its pre-Medieval Warming value. Similarly, Plimer claims that El Niño “lasts for a month or so” (p. 350), and then, two pages later, says that it “lasts for 1 to 2 years” (p. 352). When discussing atmospheric carbon dioxide concentration, Plimer claims, “The current CO2 content of the atmosphere is the lowest it has been for thousands of millions of years,” and provides two recent values, 360 and 378 parts per million by volume (ppmv) (p. 425). Elsewhere, however, he estimates CO2 concentration as being between 200 and 260 ppmv within the last 100,000 years (p. 277) and notes drops “below 180 ppmv” at 650,000 and 800,000 years ago (p. 278). . . .

View all articles by Gus Van Horn →
Letter to the Editor
Review: Goddess of the Market, by Jennifer BurnsReview: Red Hot Lies, by Christopher C. Horner