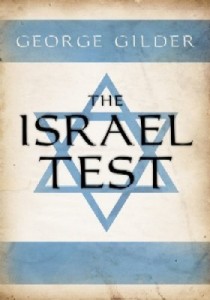 According to George Gilder, Israel’s defenders have failed to make a compelling case for the country’s right to exist—though not for lack of trying. Gilder cites, as one example, Alan Dershowitz, who has contributed two books offering “over thirty chapters of evidence against [anti-Israel] propaganda.”

Dershowitz cogently contests the proposition that Israel is a racist bastion of apartheid, a genocidal expansionist power, and a crypto-Nazi perpetrator of “massacres.” He ably refutes the verdict of the relevant UN committee that Israel is “the world’s primary violator of human rights” . . . [And he] even takes the trouble to answer charges of the ineffable Iranian president Mahmoud Ahmadinejad as if the ruler were moved by legal niceties and resourceful argument (pp. 20–21).

But, although Gilder acknowledges that Dershowitz’s arguments refute the typical charges made against Israel, he says that this defensive posture is an all-too-typical mistake. “The central error of Israel’s defenders is to accept the framing of the debate by its enemies. . . . Locked in a debate over Israel’s alleged vices, they miss the salient truth running through the long history of anti-Semitism: Israel is hated above all for its virtues” (pp. 21–22).

For all its special features and extreme manifestations, anti-Semitism is a reflection of the hatred toward . . . capitalists that is visible . . . whenever an identifiable set of outsiders outperforms the rest of the population in an economy. This is true whether the offending excellence comes from the Kikuyu in Kenya, the Ibo and the Yoruba in Nigeria . . . [or] the over 30 million overseas Chinese [throughout] Southeast Asia (p. 36).

In The Israel Test, Gilder zeros in on both the source of Israel’s success and the source of hatred toward the nation, making a strong case for why the nation’s continued existence should be both supported and celebrated.

According to Gilder, the reason for Israel’s remarkable wealth and prosperity, particularly since the early 1990s, is that the nation has turned away from socialism and toward capitalism, accomplishing “the most overwhelming transformation in the history of economics” (p. 109).

In a decade, it went from being a nondescript laggard in the industrial world to become a luminous first. Today, on a per-capita basis, Israel far leads the world in research and technological creativity. . . . A 2008 survey of the world’s venture capitalists . . . showed that in six key fields—telecom, microchips, software, biopharmaceuticals, medical devices, and clean energy—Israel ranked second only to the United States in technological innovation. . . . Israel’s creativity now pervades many of the most powerful or popular new technologies, from personal computers to iPods, from the Internet to the medical center, from anti-missile defenses to the ascendant realms of “cloud” computing (pp. 109–11).

Gilder points out that, contrary to the belief of many, neither these achievements nor Israel’s concomitant rise in wealth were stolen from anyone. Gilder completely rejects what he calls the “zero sum vision of economics and life” (p. 6), the prevalent view that wealth is “stolen from the exploited poor” (p. 16) and that differences in wealth are “gaps” or “imbalances” that should be corrected by government (p. 59). According to Gilder, this view stems “from the belief that wealth inheres in things and material resources that can be seized and redistributed, rather than in the human minds and creations that thrive only in peace and freedom” (p. 14). . . .

View all articles by Daniel Wahl →
Letter to the Editor
Review: Islamic Imperialism: A History, by Efraim KarshCapitalism: The Only Moral Social System
Return to Top