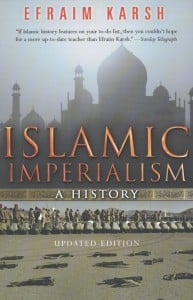 Since 9/11, cultural critics and religious apologists have argued the question of Islam’s militaristic nature: Is Islam inherently violent, or is it a peaceful religion corrupted by today’s Islamic terrorists? Efraim Karsh does not argue that Islam is necessarily more inclined to violence than any other religion, or that today’s terrorists have perverted Muhammad’s message. Rather, he claims, Islamic culture has always been (and potentially always will be) associated with and spread by bloodshed and violence. This, he believes, is less because of the fundamental tenets of Islam than because of the fact that the religion’s leaders and adherents have always been motivated by delusions of imperial grandeur achievable only by force.

In trying to explain the motivation behind the attacks of 9/11 and the militancy of today’s Islamists in general, Karsh documents Islam’s history of political violence. He tells the story of Islam, from Muhammad’s rise to power in the early 7th century, through the rule by caliphates of the medieval period, through the rise and fall of the Ottomans, up to today’s “renewed quest,” headed by terrorists such as Osama bin Laden, for a universal Arabic-Islamic empire.

In Karsh’s view, Islamic violence has always been driven more by political and imperial ambition than by religious fervor. Recounting key aspects of Islamic history, from Muhammad’s many raids; through the persecutions, assassinations, and wars of conquest that followed; through the resurgent violence in the last century, Karsh leaves the reader with no doubt that Islam’s past and present have been riddled with violence, and that its future likely will be too.

Karsh explains that Islam developed on a foundational premise of an “inextricable link between religious authority and political power,” established by Muhammad himself (p. 13). What “made Islam’s imperial expansion inevitable” is that Muhammad’s umma (community of believers) accepted a credo that combined a universal religion with the necessity of territorial conquest to establish political rule to enforce that faith (p. 18).

Islamic Imperialism: A History is not a comprehensive or straightforward history of Islamic empires or culture. Rather it is a history of Islamic leaders’ dream (Karsh’s word) of achieving a global empire and the actions they have taken toward realizing that dream—a dream that, Karsh argues, can never become a reality. . . .

Andrew Lewis is the assistant director at VanDamme Academy, where he teaches a three-year history curriculum (Ancient, European, American) to elementary and junior high students. From 1995–1999, he worked with Dr. Leonard Peikoff on The Leonard Peikoff Show; and from 1999–2002, he hosted his own radio show, applying philosophy to current events. Mr. Lewis studied philosophy at the Objectivist Academic Center, the University of Melbourne, and the University of Southern California, and he lectures regularly at Objectivist conferences.