I’m an environmental scientist, but I’ve never had time to review the “evidence” for the [man-made] causes of global warming. I operate on the principle that global warming is a reality and that it is human-made, because a lot of reliable sources told me that . . . Faith-based science it may be, but who has time to review all the evidence? كازينو أون نت (p. 318) 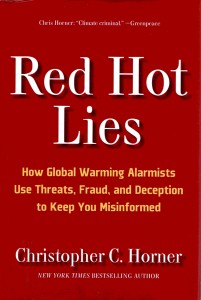 That is just one of many astonishing statements by global warming alarmists that Christopher C. Horner catalogs and analyzes in Red Hot Lies: How Global Warming Alarmists Use Threats, Fraud, and Deception to Keep You Misinformed. Horner amply demonstrates that the acceptance of such “faith-based science” is the modus operandi of many activists, journalists, and politicians—who want you to accept it too.

Horner exposes the tactics alarmists use to sell you on the faith and keep you ignorant of the facts surrounding alleged global warming. One such tactic is simple, premeditated deception:

Consider the example of Gore’s co-producer Laurie David, who followed [Gore’s documentary, An Inconvenient Truth] with a book aimed at the little ones. . . . [In the documentary] one ought to have suspected that Al Gore was up to something when he ran two lines [for CO2 concentration and temperature change] across the screen . . . claimed a cause-and-effect relationship, and then forgot to superimpose them. . . . Gore was correct to insist there was a relationship between the temperature line and the CO2 concentration line, as measured over the past 650,000 years. . . . The relationship, however, was the precise opposite of what he suggested: historically, it warms first, and then CO2 concentrations go up.

Gore’s wording and visuals were cleverly deceptive—he implied, without stating . . . that CO2 increases are followed by temperature increases. The reason he didn’t source his claim is that the literature doesn’t support it.

Somehow believing only the young would bother to open their [book] targeting children, David and [co-author Cambria] Gordon weren’t so clever. Their book included the two lines, but dared superimpose them, and even stated the phony relationship more outlandishly than Gore did in his film. The reason that temperature appeared to follow CO2 proved to be because they reversed the labels in the legend (pp. 199–200).

Horner shows that such deceptions are typical, not just of documentary producers and author-activists seeking to spread the faith, but also of so-called scientists and purportedly scientific organizations including, for instance, the UN’s Inter-Governmental Panel on Climate Change (IPCC). قوانين لعبة القمار Of the IPCC, Horner writes:

The unsupportable advocacy from these supposed sages of science begins with their threshold dishonesty of putting forth a lurid and alarming “summary,” drafted by a few dozen people who often are activists—and encouraging claims that these conclusions represent the consensus of thousands of “the world’s leading scientists” from the world over (p. 294). . . .