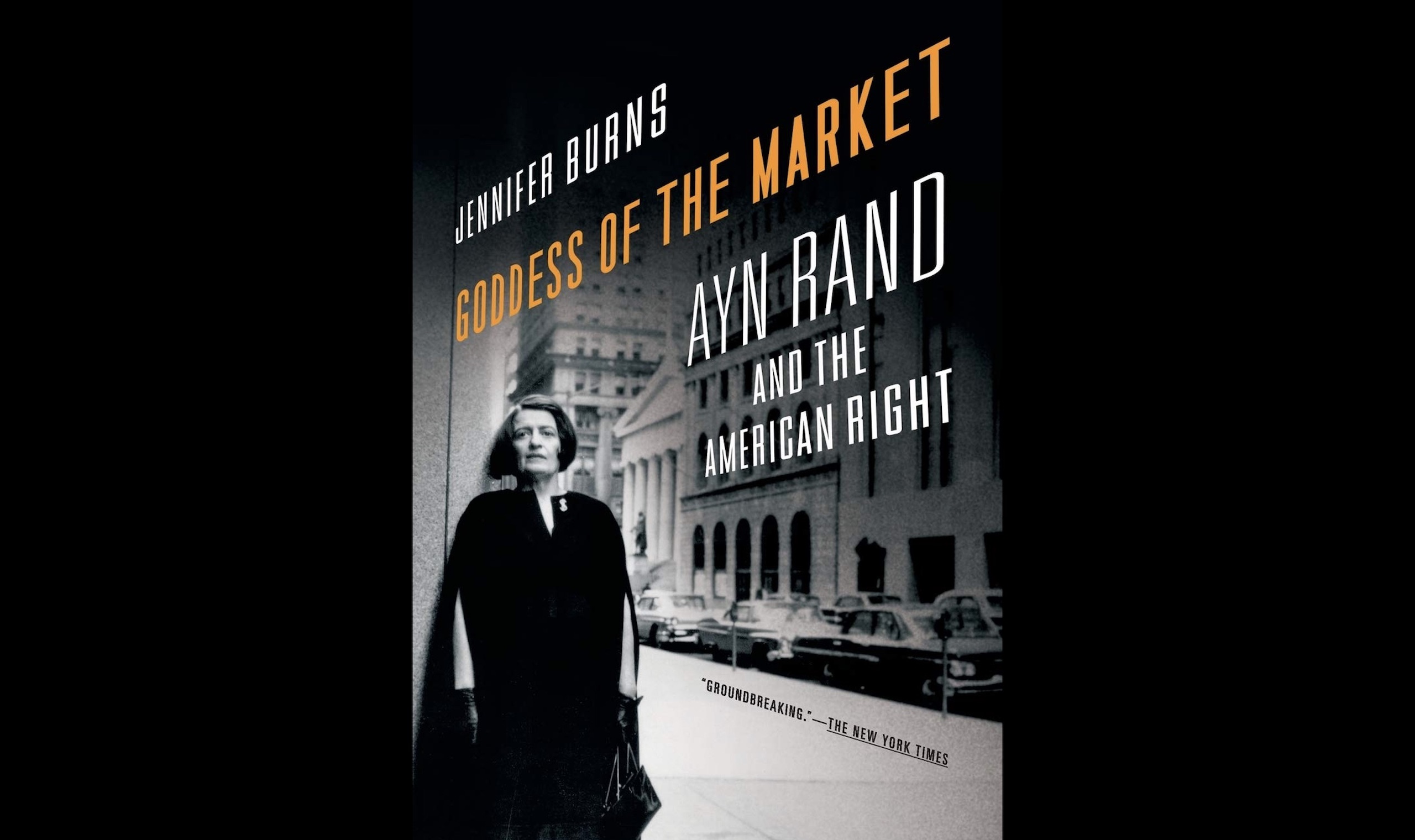 Review: Goddess of the Market, by Jennifer Burns

Every great man nowadays has his disciples, and it is always Judas who writes the biography. . . . Formerly we used to canonise our heroes. The modern method is to vulgarise them. —Oscar Wilde, “The Critic as Artist” (1891)

Ayn Rand (1905–1982) was a great novelist and philosopher, who, in her lifetime, attracted what could be called “disciples,” and it was Judas who wrote the biography. Mr. and Mrs. Judas, in fact, as the first biography was The Passion of Ayn Rand by Barbara Branden (1986), followed by ex-husband Nathaniel Branden’s memoir, Judgment Day: My Years with Ayn Rand (1989).1 The Brandens broke with Ayn Rand and her philosophy in 1968, and their accounts of her life are riddled with the bias and smears one would expect from embittered ex-disciples. Whereas formerly they coauthored a book in which they treat Rand as a hero,2 in these later works they vulgarize her.

Jennifer Burns’s Goddess of the Market: Ayn Rand and the American Right is the first biography to appear since the Brandens’.3 As Burns has no personal ax to grind, is a professor of history, and had nearly unprecedented access to the Ayn Rand Archives, those interested in Rand had reason to expect Burns’s book to tell much about the life and thought—especially the political thought—of the author of The Fountainhead and Atlas Shrugged. And although, in the 21st century, it may be too much to expect an academic biography that “canonizes”4 Rand, it is reasonable to hope for a portrayal that steers clear of vulgarization. Unfortunately, those who have such expectations will be disappointed.

What readers might have expected—what such a book could have been—is a presentation of the development of Ayn Rand’s political thought and its basis in her more fundamental philosophy, a history of her political activities and interactions with others on the right explained largely in terms of her philosophy, and a discussion of how she compares to others on the right in terms of essentials. The successful execution of such a project would not require agreement with Rand’s philosophy or political views; but it would require at least a basic understanding of, and interest in, her philosophical fundamentals and her arguments for her political ideas. Burns, however, has no grasp of or interest in Rand’s philosophical ideas or arguments, and chose to write a different sort of biography. Consider just a few of the book’s major problems:5

3 I exclude Jeff Britting’s Ayn Rand (New York: The Overlook Press, 2004), a brief pictorial biography. Goddess of the Market preceded by a couple of weeks Anne Heller’s Ayn Rand and the World She Made (New York: Nan A. Talese, 2009). In her blog, Burns reports, “The primary stipulation [of the Ayn Rand Archives] was that I not use the archival material to write a full length biography, since the Ayn Rand Institute had commissioned an Objectivist literary scholar, Shoshana Milgram, to write an authorized biography. Because my focus was on Rand in relationship to a particular aspect of American history—the American right—my work was classified as a ‘special study’” (http://www.jenniferburns.org/blog/64-in-the-rand-archives-part-1-gaining-access [accessed November 22, 2009]). In fact, her book is as much a biography as it is such a special study (especially with respect to selectivity).

4 I take this in the way I believe Wilde intended it: to celebrate the greatness of a hero, and not the flaws discovered or invented by the biographer.

5 These are by no means the only problems. The book is filled with errors—major and minor —concerning Rand’s life and the nature of her thought. For example, Burns claims that according to Rand “the state is always a destroyer, acting to frustrate and inhibit the natural ingenuity and drive of individuals” (p. 3). This is patently false; and that Burns thinks it is true explains (in part) her failure to appreciate the significant differences between Rand and libertarians. See also note 8 below.

8 Burns employs such unsupported evaluations in her lamentable attempts at literary analysis as well. Her descriptions of Rand’s novels are interlarded with snarky remarks presented as obvious. For example: “Confusing and conflicted, Dominique is among Rand’s least convincing creations” (p. 46); Isabel Paterson “advised Rand to prune all unnecessary adjectives [from The Fountainhead], a change that would have gutted the novel” (p. 85).