Suppose Car Insurance Was Considered to Be a 'Right' 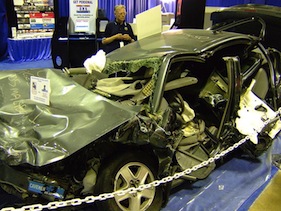 The major impetus behind the Democratic health care plans is not economic—it is moral. The claim that health care is a moral right has motivated enormous government coercions against the medical industry for nearly fifty years. But this moral claim has blinded people to the fact that huge price increases have necessarily followed the growth of the coercions.

To understand why, it is instructive to consider what would happen if car insurance were considered to be a “right” and the right was enforced by the government.

After the purchase of a home and the ordeal of major surgery, a car is most people’s biggest financial risk. One mistake—or one bad driver—can harm dozens of people. We need insurance, so why should it not be considered a right?

Car insurance is provided by companies that manage their investments in order to absorb financial losses. If insurance is considered to be a “right,” then someone must be force to provide it: either the companies directly, or the citizens through coercive taxation. Either way, the new “right” will be taken by physical force, that is wielded by the state against those who are bound, by law, to provide it.

To enforce this new “right,” the government must take money from some people and give it to others, without regard for the actual risk they pose. As huge amounts of money are pumped into insurance markets, demand increases, and prices rise. Government officials blame the companies, so they pass more controls, thus squeezing the supply. Prices rise further—the law of supply and demand cannot be thwarted.

People want to be protected from greedy repair shops and auto manufacturers. So the companies undergo a ten-year approval process costing millions of dollars for new products.  As lawsuits mount, courts enforce claims of strict liability against the companies—who pass the costs on. Price rises accelerate.

As people get used to a “right” to car insurance, they demand more coverage. Oil changes, brake jobs, torn seats and new tires become insurance matters. If insurance is a “right,” then no one should be deprived of these goods because he cannot pay for them. Every visit to the repair shop—big or small, routine or emergency—now involves an insurance claim. Prices escalate.

Male drivers under 25 pay more because they are statistically higher risks—but they resent this inequality. So they assert their “right” to insurance at the same price as older, wiser drivers. Companies spread the costs out across the board—and as good drivers face higher premiums, they demand more coverage. Prices shoot up further.

By this point, no one asks what a repair job will actually cost—they ask only about their “co-pay.” Customers have little incentive to keep costs down. Why bother to change the oil, if the insurance will give you a new engine?

As regulations increase, critics castigate companies who are unwilling to cover pre-existing conditions, such as a fender dented before the car was insured. As paperwork increases, repair shops that once had four mechanics and one secretary now have five secretaries, who spend their days filing claims. Prices rise further—until car insurance becomes a crushing burden.

By this point, the very idea that insurance should be used for catastrophic losses—not routine maintenance—has been lost. A chorus of calls for “reform” demands more government coercion to enforce the “right.” Anyone who suggests reducing the controls is shouted down by those who blame the “free market” for rising costs. By this point, most people have forgotten what a free market is—or that they had no “right” to insurance before someone else produced it—or that there was a time when insurance was not so costly.

This is fiction, of course—but it directly mirrors what has happened in health care. After World War II, companies began to offer employee health insurance because government controls forbid them from paying higher wages. Twenty years later, the “Great Society” lavished billions on programs—and as prices rose, regulation against the producers multiplied. HMOs and a host of other schemes were tried.

Now, bucking under the weight of economic distortions and regulations, the law of supply and demand is wreaking vengeance on those least able to pay. Medicare and Social Security are approaching insolvency, insurance companies are forbidden from selling across state lines or from offering innovative health savings accounts, and the solution offered is—even more programs, with a price tag so large that it that cannot be grasped by the human mind.

To expand government programs is not “reform.” It is an extension of sixty years of government interventions. The government now controls nearly fifty percent of all health care dollars—paid for by skyrocketing prices, taxes and borrowing. The correlation with history, and with the law of supply and demand, is precise and inescapable.

The primary cause of medical price increases is the government coercions. But the cause of the coercions is the idea that health care is a right. Until we understand that nothing is a “right” if others must be forced to provide it, we will continue to swallow the same poison, and we will reap even worse consequences in the future.