Review: The Snowball: Warren Buffett and the Business of Life, by Alice Schroeder

Nine-year-old Warren Buffett is in his yard playing in the snow.

Warren is catching snowflakes. One at a time at first. Then he is scooping them up by handfuls. He starts to pack them into a ball. As the snowball grows bigger, he places it on the ground. Slowly it begins to roll. He gives it a push, and it picks up more snow. Soon he reaches the edge of the yard. After a moment of hesitation, he heads off, rolling the snowball through the neighborhood. And from there, Warren continues onward, casting his eye on a whole world full of snow (prologue). 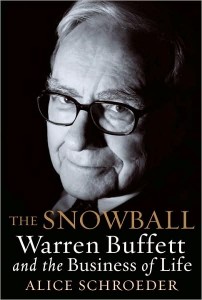 Many decades later, Alice Schroeder, a former insurance analyst at Morgan Stanley and the author of The Snowball, is sitting in front of Warren Buffett, one of the world’s richest men. “Where did it come from,” she asks, “Caring so much about making money?” Buffett leans forward, “more like a teenager bragging about his first romance than a seventy-two-year-old financier,” and begins to tell his story: “Balzac said that behind every great fortune lies a crime. That’s not true at Berkshire [Hathaway]” (p. 4). Thus begins The Snowball, one of the most highly anticipated biographies of the past few years and the first to be written about Buffett with his full cooperation.

As its full title indicates, The Snowball: Warren Buffett and the Business of Life sets out to present Buffett’s thinking, not only about business but about life in general. Among the many topics this hefty volume explores are those individuals who influenced his thinking. A major figure in this respect is Buffett’s father, whom he idolizes and from whom he learned a crucial point when it comes to judging both oneself and others:

In addition to the valuable lessons he learned from important figures in his life, Schroeder shows how Buffett’s own interests and thinking during childhood contributed to his development. Schroeder reveals him to have been an efficacious child, intensely interested in collecting and processing facts.

Warren thought about numbers all the time and everywhere, even in church. He liked the sermons, he was bored by the rest of the service; he passed the time by calculating the life span of hymn composers from their birth and death dates in the hymnals.

In his mind, the religious should reap some reward for their faith. He assumed that hymn composers would live longer than average. Living longer than average seemed to him an important goal. But piety, he found, did nothing to improve longevity. Lacking any personal sense of grace, he began to feel skeptical about religion. . . . [T]he information he had collected about the hymn composers had taught him something else, however, something valuable. He was learning to calculate odds. Warren looked around him. There were opportunities to calculate odds everywhere. The key was to collect information, as much information as you could find (p. 52).

The Snowball details Warren Buffett’s progression from a tiny fact collector to a teenage rebel to a brilliant moneymaker. Along the way, it offers two main values to patient readers. It shows how Buffett accumulated a portfolio of great companies and one of the world’s largest fortunes—starting from the money he earned on his paper routes. And it shows how he accumulated a set of truly great friends—starting from his beginnings as a somewhat awkward and antisocial child.

Toward revealing how Buffett accumulated his vast wealth, Schroeder shows how Buffett found a verifiably effective system for identifying potentially lucrative investments. After reading Benjamin Graham’s The Intelligent Investor and being greatly impressed by the author, Buffett went to Columbia University to study under him. Schroeder explains the “three main principles that required nothing more than the stern discipline of mental independence,” which Buffett learned in Graham’s class, as follows: . . .