Review: The Garden of Invention, by Jane S. Smith 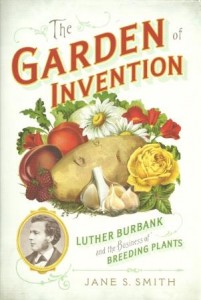 In 1849, millions were starving due to a then-mysterious disease that “in a matter of days, if not hours, could transform a thriving field [of potatoes] into a slimy, foul-smelling patch of rotting vegetation” (pp. 38–39). Everywhere, plants were “extremely inconspicuous, [tasted] terrible, or [went] to seed in a fast and fabulously prolific way, leaving nothing behind to harvest.” And plants had evolved characteristics by which they survived just long enough to reproduce, characteristics that were unsuitable for feeding a large and fast-growing population (p. 40).

But all this was about to change, and dramatically so, thanks to a man born that year: Luther Burbank (p. 6). In her new book The Garden of Invention: Luther Burbank and the Business of Breeding Plants, Jane S. Smith presents the life of this extremely influential but mostly forgotten plant breeder and businessman, emphasizing his innovations and the methods he used to develop and sell them.

Burbank displayed some mechanical ingenuity as a child, but, Smith reveals, apart from this, nothing in Burbank’s background suggested that he might become an inventor of new plants (p. 19). Though young men of his time were encouraged to work in an academic setting, Burbank, fond as he was of the outdoors, was unsure whether he wanted to follow suit—until, at the age of 21, he picked up a copy of Charles Darwin’s The Variation of Animals and Plants Under Domestication.

Smith describes this book as a “detail-crammed response to those who had criticized On the Origin of Species by Means of Natural Selection as a hypothesis unsupported by sufficient proof” (p. 27), then concisely sums up what Burbank read:

From gooseberries to gladioli, Darwin compiled his evidence: plants changed in response to outside stimulus (like the cabbages Darwin described that changed their shape or color when planted in different countries), and these changes could happen within a short time span (like the hyacinths he said growers had managed to improve from the offerings of only a few generations earlier). The causes of the changes were still largely unknown, but their occurrence was a fact beyond dispute. This was evolution measured in human time (p. 28).

Burbank took from the book several big ideas—each of which Smith relates in an easy-to-read style: . . .

View all articles by Daniel Wahl →
Letter to the Editor
Review: Fred Astaire, by Joseph EpsteinSuppose Car Insurance Was Considered to Be a ‘Right’
Return to Top