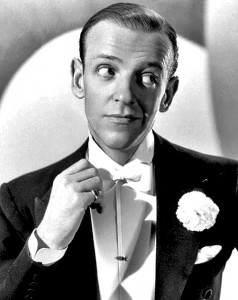 In the light and lively Fred Astaire, author and journalist Joseph Epstein offers an excellent overview of the career of the world’s greatest male ballroom and tap dancer. This short biography, part of Yale University’s Icons of America series, is like its subject—accessible yet elegant.

Astaire began his dance training at the age of five after his mother, Johanna Austerlitz, brought him to New York City in the hopes of grooming him and his talented older sister, Adele, for careers in show business. Attending dance school with his sister, young Frederick took to the art form and was soon rehearsing with Adele in routines developed by their instructor. Changing their last names to “Astaire,” the brother-sister act hit the theatrical circuit and began a professional career that lasted many years and included appearances on Broadway with Al Jolson and Fanny Brice; and work with famed showman Flo Ziegfeld, who paid the duo an impressive $5,000 per week during the Depression (pp. 12, 15).

After Adele retired at the age of thirty-five, Astaire sought fortune in Hollywood. Shortly after being famously dismissed by a studio executive as “Balding. Can’t sing. Dances a little.” (p. 18), Astaire was noticed by Metro-Goldwyn-Mayer (MGM) and signed to a three-week contract for $1,500 per week. His first role—playing himself in Dancing Lady opposite Joan Crawford—proved that he had potential as a screen star (p. 19).

Epstein writes that Astaire was perfectly suited to a particular type of motion picture—the musical comedy—which he describes as a “group of songs and more or less energetic dances strung out over a generally preposterous plot . . . a purely American art form” (p. 45). Astaire practically created the genre—and then dominated it. He matched film to dance with precision, making sure that the camera filmed his entire body, not merely his feet or his face (p. 48). Epstein quotes arts writer Edwin Denby on Astaire’s ability to integrate dance and film: . . .

View all articles by Scott Holleran →
Letter to the Editor
Review: The Snowball: Warren Buffett and the Business of Life, by Alice SchroederReview: The Garden of Invention, by Jane S. Smith
Return to Top