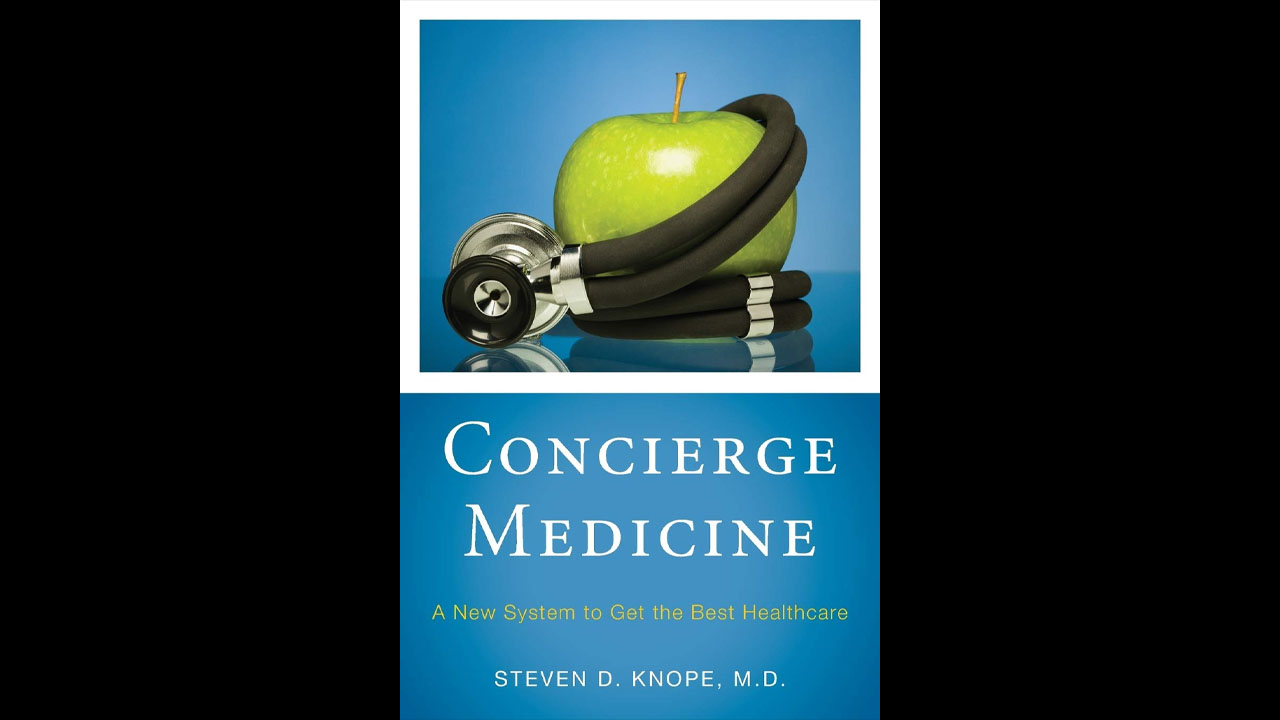 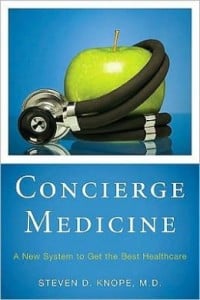 After years of traditional medical practice and the frustrations of dealing with Medicare, government regulations, and third-party payers such as HMOs, Dr. Steven Knope, an internist, opened a practice in the emerging field of concierge medicine. Concierge medicine, Knope explains, is “a form of private medical care in which patients pay a physician directly for increased time and access to that doctor.” Although there are many variants of this model, they all “represent a return to the privatization of medicine” (p. 10). Knope’s book, Concierge Medicine: A New System to Get the Best Healthcare, describes the advantages of a concierge practice for both doctor and patient. The chief benefit for the doctor is a return to the autonomy afforded by a direct financial relationship with the patient, unmediated by third parties such as Medicare or HMOs. This enables the doctor to spend more time with the patient and to have more control over his own compensation. The chief benefit for the patient is the better care afforded by increased time with and easier access to the more-focused, better-compensated doctor.

Knope stresses the importance of a physician’s time—time spent reviewing the patient’s past medical history, listening carefully to the patient’s description of his current problem, examining the patient, thinking about and researching the patient’s problem, discussing with the patient his diagnosis and options, discussing the patient’s case with specialists, reading to stay current with medical literature, and so on. He shows how declining Medicare reimbursements and HMO compensations require doctors to spend less time with each patient in order to stay profitable. While recognizing the importance of sophisticated medical tests, Knope explains, “Most diagnoses are not made in the CT scanner. Most diagnoses are made with the mind of the doctor,” and that mind requires time to do its job properly (p. 20).

Using examples of typical days’ schedules from his own practice before and after adopting the concierge model—and describing actual patient cases and his management of them under the concierge model—Knope illustrates the differences between the kind of practice most common today and a concierge practice. Anyone who has been to a doctor will recognize the standard medical model and see the marked difference in concierge care.

For example, Knope describes a case in which a patient’s husband called saying his wife was experiencing a severe headache. Rather than offering her an appointment or just referring her to the ER to see an unknown physician, Knope met the patient in the ER himself. He examined her and ordered a sophisticated imaging test that confirmed the diagnosis of a brain aneurysm. He quickly called a top expert at another hospital to treat the problem immediately, in a minimally invasive way. His patient, her brain, and her personality were saved, thanks to the exceptional care.

To recognize the value of concierge medicine, Knope argues, one must see one’s own health as an asset that requires investment. He speaks of how we invest in our homes, and says “your body is the only home that you will live in for the rest of your life” (p. 82).

Knope explains what he regards as the three key components to comprehensive health care—expert medical care, an individualized exercise program, and a sound nutritional plan—and he shows how he deals with each of these components in his concierge practice. For each area, Knope shows how to set objective goals and how to track and evaluate progress using objective measurements. For example, regarding exercise, he discusses medical studies that have demonstrated clear links between fitness and mortality rates, and he explains how a patient’s strength and endurance are objectively measurable toward the assessment of his health. With respect to nutrition, he discusses the importance of gathering objective data, such as via a three-day dietary log, to track what a patient is eating; and he explains procedures, such as measuring body composition (i.e., percentage of body weight as fat and muscle), to track the progress of an adjusted diet. As to general health, he discusses various factors that can and should be measured objectively, such as blood pressure, cholesterol profile, complete blood count and blood chemistry, and “screening tests, such as a mammogram for women, PSA for men, and a colonoscopy where appropriate” (p. 35).

The chief value of this book is in making people aware of the existence of this new form of medical practice. Private medicine is in serious jeopardy in the United States. For example, it is illegal for seniors on Medicare to contract privately with their physicians for “covered services.” That is, if a doctor offers a service that is “covered” by Medicare, and he charges $150 but Medicare pays only $75 for the service, it is illegal for the doctor to charge the remaining $75 (or any other amount) to the patient. Even if the patient wants to pay the difference, the doctor cannot accept it. These types of restrictions (and there are countless others) are why many doctors are not accepting new Medicare patients. This is leading now in the United States to the phenomenon seen in countries with socialized medicine where, in theory, the patient has “coverage” but in practice cannot get health care. With the push for universal health care in the United States, these types of restrictions will only multiply.

Knope devotes an entire chapter to discussing the means—for example, Health Savings Accounts (HSAs)—by which ordinary patients can afford this extraordinary medicine. And he provides a wealth of good general advice on choosing and evaluating a doctor, being a smart and active-minded patient, and treating one’s health as the valuable asset that it is.

Although Knope devotes his longest chapter to the defense of concierge medicine, the book’s chief flaw is its inadequate defense against critics of the practice. The typical charge against concierge medicine is that it is “unethical” or, at best, “mercenary”; and Knope himself has been called “selfish and unethical,” and was criticized on the front page of the Arizona Daily Star when he opened his current practice. Knope responds that this is just “politics” and that it “sells newspaper copies” (p. 103). He recognizes to some extent that a physician has a right to practice in such a form, and that patients have the right to contract with their doctors in this way. He even says he has “no trouble with capitalism” (p. 105). But he concedes that he knows of “no gold standard for testing” what form of medical practice is “more ethical”; in such matters, he says, “there will always be a subjective component” (p. 122). But there is an objective standard for determining what types of doctor-patient relationships are ethical: the principle of moral justice, which calls for voluntary trade to mutual benefit. This is the basic moral principle at the root of the free market, and it is as applicable to doctors as it is to lawyers, CEOs, plumbers, day laborers, and everyone else in the market.

Despite its inadequate moral defense of this supremely moral practice, however, Concierge Medicine deserves wide readership. It will be of particular interest to two kinds of people: physicians seeking to escape the chokehold of increasingly government-controlled medicine, and anyone who recognizes the value of expert private medical care and is willing to pay for it.

Michael Garrett, MD, practices emergency medicine in central Indiana. He received his BA from Ball State University and his MD from Indiana University School of Medicine. He completed a residency in Family Medicine at Ball Memorial Hospital.

View all articles by Michael Garrett →
Letter to the Editor
Review: Predictably Irrational, by Dan ArielyThe Spring Issue of TOS
Return to Top