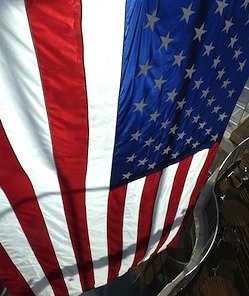 One thing that is often implied, if not explicitly stated, in this election is that John McCain—like George Bush—really loves his country. Of course McCain makes mistakes in particular areas, but, according to this view, these are the forgivable errors of a true patriot. McCain's values and principles are fundamentally sound, it follows, he just errs in the practice. Given his good principles, we are told, he can "learn" to better apply them. If we advocate for his election on the basis of these principles, we are told, we can then guide him to better apply these principles in practice.

This same argument has been made about Bush for eight years. Now we are hearing it applied to McCain: elect him, and he will somehow "learn" to repudiate his socialist economic plans, his plans to keep American troops fighting for others, etc. etc.

This is nonsense for at least three reasons.

First, why would a 72-year-old man suddenly learn to repudiate that which he has advocated for the past 35 years? What motive would lead him to do this? There is none. He will continue to advocate that which he has automatized and practiced for decades: McCain wants an economic plan that differs only in detail from that of Obama, because he agrees in principle with Obama.

Second, even if McCain did (somehow) have an epiphany of insight (a light in the sky?), why should he reject the very means he used to achieve the presidency? Why should the very success of his efforts lead him to reject those efforts and the altruistic principles at their foundation? He will have a mandate—both in the electorate, and in his own mind—to continue, and to expand, the program that got him elected.

Third, and more deeply: To love a thing is to know and love its nature. McCain sees America as the land of service, where our goodness is measured by our willingness to sacrifice. Is this America's nature? If it is, then McCain loves his country, and we should support his plans to increase the sacrificial, socialist economic policies that he has advocated. But let us not fool ourselves about what we are supporting: a socialist vision of America that differs profoundly from its constitutional principles.

Of course, what McCain loves about America is not its essence. America’s purpose is not a “more perfect” welfare state, but rather a more perfect union of free individuals. Let us then recognize that McCain neither knows nor loves America. He loves an image that is the very antithesis of America. As president he will "learn" to more strongly apply his "love" by shaping America into that image: a nation of sacrificers.

Let us consider more broadly the Republicans over the past two generations. What have the leading Republicans actually learned since Goldwater? On a policy level they have learned to quit worrying about and instead love the welfare state. They claim not to oppose it, but to better manage it. The essence of their domestic policy is: “my gang will do a better job.”

But on top of this pragmatism, they want to be moral, which to them means being “compassionate” with our wealth. Their guiding management principle is: to redistribute wealth while purporting to cut taxes. To be both moral and politically successful, the Republicans have learned to love the welfare state.

Meanwhile the Democrats are learning to love God. Each has learned: There is no electoral success without religious socialism, or, if this makes you uncomfortable, socialistic religion.