Turkey's Turn Back to the Book 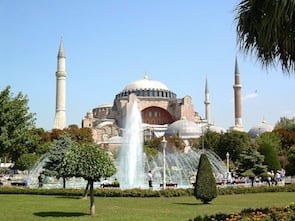 According to a recent article in the Jerusalem Post (“Is Turkey's Government Starting a Muslim Reformation?” Daniel Pipes, May 22, 2008), a government ministry in Turkey, the so-called “Presidency of Religious Affairs and the Religious Charitable Foundation,” has undertaken a three year project to study and condense thousands of pages of material associated with Islam. The problem, they claim, is that fourteen hundred years of “Hadiths,” reports about the sayings and deeds of Muhammad, have distorted the meaning of Islam as revealed in Islam’s central text, the Koran. The goal of the project is to weed-out all that is inconsistent with the Koran.

According to one of the eighty Islamic theologians involved, “The Koran is our basic guide. Anything that conflicts with that we are trying to eliminate.” According to Mehmet Görmez, a senior lecturer at Ankara University, “We want to bring out the positive side of Islam that promotes personal honor, human rights, justice, morality, women’s rights, respect for the other.” To promote the spread of Islam in the 21st century, the Turkish theologians want to redefine how Muslims must practice Islam.

The very fact that this project is being undertaken by the Turkish government signals the rise of Islamic rule in Turkey. Any government that purports to decide which religious interpretation is “correct” has established a theocracy. The first step in any genuine religious reform must be to sever the connections between political power and religion, and to affirm the rights of everyone to think and to speak as they wish.

The promoters of the project bill it as an attempt to define a way of following Islam that is appropriate for the modern world. Since the Koran is their central authority, the first question we must ask is: What does the Koran actually say about these matters? (All passages here are taken from the Muslim Students Association translation by Yusuf Ali.)

As regards women, the Koran is clear about their subordinate status, the basis of male superiority in physical strength, and the need for women to stay home, be taken care of by their husbands, and obey under pain of beating:

Men are the protectors and maintainers of women, because Allah has given the one more (strength) than the other, and because they support them from their means. Therefore the righteous women are devoutly obedient, and guard in (the husband's) absence what Allah would have them guard. As to those women on whose part ye fear disloyalty and ill-conduct, admonish them (first), (Next), refuse to share their beds, (And last) beat them (lightly); but if they return to obedience, seek not against them Means (of annoyance): For Allah is Most High, great (above you all). (Koran, 4.34)

The passage speaks for itself. To soften the text, the translator inserts “lightly” after “beat them,” as if wife-beating was proper if done in moderation. Who is to decide what constitutes the proper degree of beating? Male clerics, of course. But no amount of sophistry can hide the fact that this is non-negotiable advocacy of the physical abuse of women.

What of people who are not Muslims (the “other”)? The Koran is clear that they must submit to Islamic rule, accept an inferior position, and pay tribute to avoid destruction:

Fight those who believe not in Allah nor the Last Day, nor hold that forbidden which hath been forbidden by Allah and His Messenger, nor acknowledge the religion of Truth, (even if they are) of the People of the Book, until they pay the Jizya [the tax levied on non-Muslims] with willing submission, and feel themselves subdued. (Koran 9.29)

The meaning of this demand for submission was defined by one of the most revered of the early Islamic philosophers, Al-Ghazali, a central figure in the allegedly non-violent Sufi wing of Islam:

[O]ne must go on jihad at least once a year . . . one may use a catapult against them [non-Muslims] when they are in a fortress, even if among them are women and children. One may set fire to them and/or drown them . . . .

[T]he dhimmi is obliged not to mention Allah or His Apostle . . . Jews, Christians, and Majians must pay the jizya . . . the dhimmi must hang his head while the official takes hold of his beard and hits [the dhimmi] on the protruberant bone beneath his ear . . . their houses may not be higher than the Muslim's, no matter how low that is. . . . They [the dhimmis] have to wear [an identifying] patch . . . [dhimmis] must hold their tongue. (from “Sufi Jihad?” by Andrew Bostom, May 15, 2005)

This passage is directly relevant to the modern day. The height of buildings (e.g., the insulting scale of the World Trade Center), the injunctions against any criticism of Islam, the demand for a compliant, self-effacing attitude among non-Muslims, the payment of tribute (“foreign aid”), even the identifying patch demanded of Jews by the Nazis—concern with all of these issues may be found in the writings of Al-Ghazali, the most mystical of the “moderates” during Islam’s “Golden Age,” and a staunch proponent of jihad.

Those undertaking the Turkish project claim the authority to judge which texts are consistent with the Koran, and which are not. But what does the Koran say about our capacity to make such judgments? It denies them categorically and repeatedly—which is why many fundamentalist Muslims claim that the Koran is all they need. As regards fighting, for instance, the Koran says:

Elsewhere the Quran claims that jihad must continue “until all dissension is ended.” (8.39) Abject universal agreement with the clerical elite is the goal. You are not capable of judging when and whom you must fight—and neither may you judge which aspects of the Koran to follow. Your mind is incapable of independent judgment. Your role in life is to obey the clerics.

Such passages are only a sample of what is found in the book that an agency of the Turkish government will use as its basic guide for the next century.

It should not be surprising that the positions taken by this same government ministry are avowedly opposed to thought, speech, and writing that is critical of Islam. Here, from a February 4, 2008 press release on its website, is its position toward the film “FITNA,” which was critical of Islam:

This film involves direct insult to Islam’s Holy book and the Islamic religion, which is another show of “hostility” today, provoking violence and hatred against it, though Islam has complemented the other religions with its message emphasizing equality, freedom of conscience and mutual respect among people. . . .

The Muslims strongly condemn all forms of hatred messages and the wrong perceptions fabricated against Islam. The Muslim world is aware of the provocations that aim to demonstrate Muslims as potential terrorists and gradually exclude them and hurt their feelings.

Note the appeal to “feelings” and the claim that “hurt feelings” are grounds for censorship—suppression of speech and writing by government force. Note that those who burn, bomb, and behead people while chanting “Allahu Akhbar” are not seen as insulting Islam—or hurting anyone’s feelings; reproach falls rather on those who identify the fact that the burners, bombers, and beheaders invoke Islam when they rampage.

This is not reform. It is a call for a new fundamentalism on the authority of a thirteen-hundred-year-old vicious fairytale, and for a ceaseless struggle against those who would criticize it. Indeed, the use of terror in fighting the enemies of Islam is directly sanctioned by the Koran:

Against them make ready your strength to the utmost of your power, including steeds of war, to strike terror into (the hearts of) the enemies, of Allah and your enemies, and others besides, whom ye may not know, but whom Allah doth know. . . . (8.60)

Genuine reform of Islam cannot occur without challenging the Koran itself. But this is the one thing that the Turkish theologians will not do. Indeed they have energetically denied western press reports that they are undertaking such reforms. The head of the ministry, Ali Bardakoğlu, stresses that "we are not reforming Islam; we are reforming ourselves, our own way of religiosity." And Dr. Mehmet Görmez, deputy director, said: "Our project is not aimed at effecting a radical renewal of the religion, as is claimed by the BBC.” A reporter, says Dr. Görmez, “distorted the facts” in making this claim.

We should take him at his word. Any “interpretation” of Islam that is consistent with the Koran as a revealed, unquestioned authority will end in a reversion to its brute, fundamental meaning: the subordination of women and non-Muslims to dictatorial rule by a clerical elite.