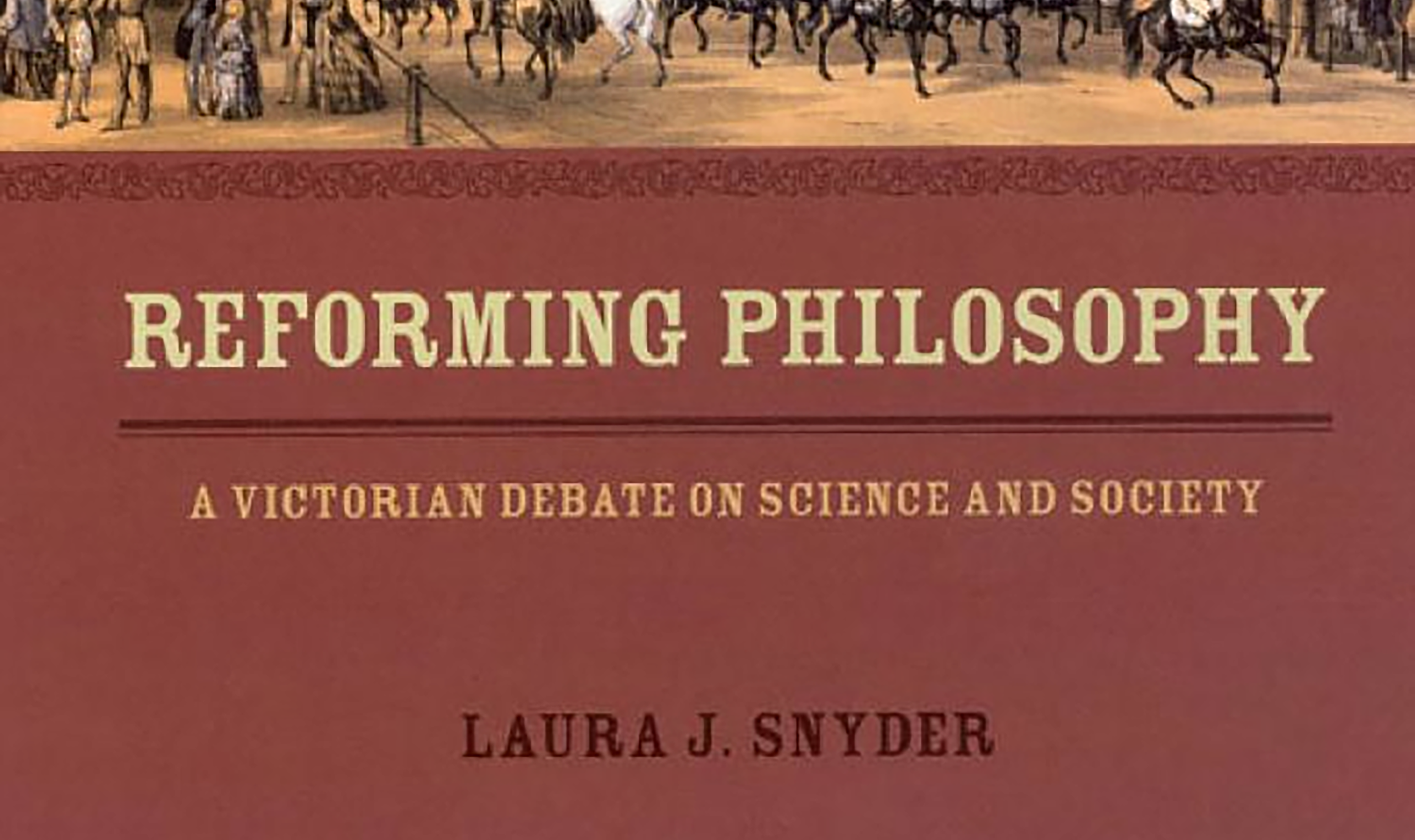 The 19th-century philosopher John Stuart Mill is widely regarded as one of history’s leading proponents of inductive science and of political liberty. Yet, oddly, philosophers working in his train have been remarkably unsuccessful in saying exactly what is wrong with the scientific skepticism or the political tyrannies of the past one hundred and fifty years. Is it possible that Mr. Mill was not such a good guy after all? This question is not the stated theme of Laura Snyder’s Reforming Philosophy, but it is the underlying spirit of this excellent work of scholarly intellectual history.

Snyder introduces us to Mill as he saw himself—a social reformer locked in epic battle with the forces of the status quo, whose philosophy Mill called intuitionism and whose most forceful advocate was one William Whewell, a “lion-like man” (Tennyson’s phrase, p. 1) and Master of Trinity College. Mill was born into London’s elite intellectual circles. He read Latin at age three, Greek by eight, Aristotle and Plato at age twelve, scholastic logic and political economy by thirteen. His first publication was on a theory of economic value. He was sixteen. He never attended college. He nominally had a career at Britain’s East India Office, but primarily he was a writer, producing works on logic, political economy, literature, moral philosophy, and current political and cultural affairs.

Whereas Mill was an intellectual-class prodigy, his nemesis was a working-class one. The son of a carpenter and twelve years older than Mill, William Whewell entered Cambridge University on a scholarship to study science and mathematics. He was elected to the Royal Society at age twenty-three and remained throughout his life an active member of the major mathematical and scientific communities and institutions in Britain. He spent his whole career at Cambridge. At different times he was professor of mineralogy, professor of moral philosophy, and vice-chancellor of the university. He penned important works on mechanics, geology, the tides, crystallography, scientific method, history, international law, moral philosophy, and political and cultural affairs. He translated Plato’s dialogues and German literature. He hated Mill’s moral philosophy.

Mill, in turn, hated Whewell’s philosophy of scientific knowledge—which might seem odd, for Mill was a social reformer with little expertise or background in the natural sciences. But Mill knew that every political and moral system rests on some theory of human cognition or epistemology, and, as Snyder explains in chapters 1 and 2, Mill saw Whewell’s epistemology as the foundation for the conventional moral and social philosophies Mill wanted to overturn.

Whewell’s epistemology was an update of Francis Bacon’s. Whewell’s system was inductive, not deductive, and, at least as he articulated it, the philosophy relied on the unassailability of fundamental concepts such as necessity and causality. As Mill saw things, these special concepts were just intuitions incapable of rational justification. To accept them would be to sanction building whole epistemological, moral, and political philosophies based on whatever unjustified ideas people happened to have in their heads. To do that would have been to thwart Mill’s campaign of social reform.

In what Snyder calls Mill’s “radicalization of induction” (ch. 2), Mill turned Whewell’s philosophy inside out. Mill granted (or rather misunderstood then granted) Whewell’s claim that induction depends on accepting notions of, for example, causality and necessity, but he assigned them a much different role in human cognition and denied that one could justifiably accept these notions. To Mill, induction is not an autonomous method but just a kind of deduction, a kind in which these contested notions provide crucial premises. But if these notions are empty, then the premises are untrue, the deductions are invalid, and Whewell’s whole inductive method falls apart. Mill did not completely abandon induction and indeed offered his famous rules for how best to reason inductively. But he held that these rules apply only in limited cases, and he thought that in the future the best scientists would rely on deduction not induction.

Mill’s rejection of Whewell’s methods did not end with his rejection of induction. He developed a philosophy that Snyder labels “ultra-empiricism” (p. 106). Mill rejected not only causality, mathematical certainty, and scientific necessity but even knowledge of the materiality of the observed world. His premises and goals forced him to conclude that reality is nothing more than the “‘Permanent Possibility of Sensation’” (p. 131), his metaphysics reduced itself to that of Bishop Berkeley (“To be is to be perceived”), and by late in life Mill acknowledged that he had “no quarrel” (p. 135) with the metaphysics of Immanuel Kant. Unfortunately, Mill’s whole framework for thinking about induction, causality, and necessity has pervaded scientific epistemology ever since.

In chapter 3, “Reforming Science,” Snyder unfolds some implications of Mill’s philosophy of science and highlights other differences he had with Whewell. Particularly interesting is Mill’s denial, natural enough given his premises, of the possibility of knowing causes that are not directly perceivable—this at the very moment when the sciences of imperceptible molecules and unobservable electromagnetic fields were advancing by leaps. But some of the most eye-opening aspects of Mill’s philosophy—and some of Snyder’s most interesting conclusions because they integrate her several lines of inquiry—come in chapter 4, “Reforming Culture: Morality and Politics.”

What, we may step back to ask, was this social reformer’s big goal? He wrote on the subjection of women, slavery, poverty, capital punishment, parliamentary structure, population, and economics. He had been reared to be a social commentator, and he played the role throughout his life. He attacked any epistemology that he thought stood in the way of his reforms. But what did he think was fundamentally wrong with society and think should be its guiding principle?

Mill was always a utilitarian. Utilitarianism had two central doctrines: in ethics, that the moral is that which contributes to the greatest happiness for the greatest number; and in politics, that every man should be free to act as he chooses as long as the action does not harm others. The first had long drawn criticism. It seemed to sanction the most ignoble pursuits and even to give preference to common over refined pleasures. If one man’s enjoyment of poetry could be sacrificed to give ten men enjoyment from a game of pushpin, utilitarian morality demanded the trade. Jeremy Bentham, the leading utilitarian of the previous generation, thought this was right, but Mill found it troubling. Mill came to think that quality of happiness was more important than mere quantity. Happiness would be improved, Mill held, if people were taught to value higher pleasures. Which pleasures were in fact higher should be determined, Mill concluded, by an “intellectual clerisy” (p.12). This cultural elite would take on educating the common men, and common men in turn would learn to submit to the guidance of their betters.

Thus Mill retained but importantly altered the utilitarian moral doctrine, and he did the same with the political doctrine. His direction there becomes clear when we consider the ambiguity in that utilitarian phrase, “as long as the action does not harm others.” This could be taken to mean “as long as one does not violate the rights of any other individual.” But Mill did not take it this way. He understood “others” as a collective. His mature political doctrine amounted to this: An individual should be free to act in any way that does not harm the public good. Though Snyder does not mention it, this, of course, is the stock construction of socialist constitutions. The 1977 Soviet constitution, for example, guarantees freedom of speech, of assembly, of religion, of self-government, of property, and so forth—and then reverses all such guarantees by saying, “Enjoyment of the rights and freedoms of citizens must not be to the detriment of the interests of society” (art. 39).

The goal of John Stuart Mill, this mighty social reformer, was to train citizens to reject the low pleasures of “selfishness” and “miserable individuality” (p. 240) and find happiness in contributing to the common good, a common good defined and promoted by a society’s selfless intellectual elite.

I wish Snyder had said something about Mill’s views on educational institutions. If she is right that Mill saw a certain epistemology as the foundation for social reform, I would expect him to have had strong views about how young citizens should be taught to think. Given the “low intellectual and moral state of all classes” (p. 311), will the citizens go freely to be reeducated? If not, then what? How will they be taught to place the common good above their selfish interests? But let me set this and occasional disagreements aside and draw the following conclusion.

Reforming Philosophy is an example of intellectual history done well. Snyder reconstructs the full context in which selected historical figures thought, wrote, and acted, but thankfully she does not cast their ideas as products determined by that context. Instead, she examines a writer’s own goals and ambitions, chosen enemies and influences, and whole oeuvre to help us better understand the writer’s ideas. Her use of neglected source material, such as drafts, overlooked writings, and unpublished letters, is particularly rewarding. I recommend the book to anyone interested in a scholarly treatment of Victorian England, of 19th-century science, of the history of scientific method, of the philosophy of induction, or of the underappreciated historian and philosopher William Whewell. For anyone who thinks John Stuart Mill was a champion of commonsense realism, inductive science, or individual liberty, the book is a must-read.

John P. McCaskey is a lecturer and researcher at Stanford University. He teaches in the Program in History and Philosophy of Science and in the Program in Ethics and Society. His scholarly research is on the history of induction. Before returning to academia in 2001, he spent twenty years in the computer business, most recently as a founder of Epiphany, Inc. He founded the Anthem Foundation for Objectivist Scholarship.

View all posts by John P. McCaskey →
Review: Sun-tzu: Art of War, translated by Ralph D. SawyerTurkey’s Turn Back to the Book
Return to Top