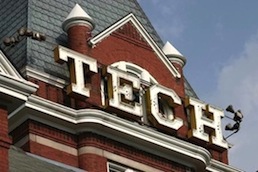 On March 13, I gave my talk “‘No Substitute for Victory’: The Defeat of Islamic Totalitarianism” to an audience of about forty at Georgia Institute of Technology. In the talk, based on my article in The Objective Standard, I rejected all forms of theocracy, but emphasized the danger posed by the Islamic state and argued for the destruction of its most obvious manifestation, the regime in Iran. I was prepared for opposition to the idea of war with Iran, and I acknowledged up front that those who recognize that religious law is wrong might disagree with my conclusion that a war against the Iranian state is necessary. But I was not prepared for the strident defense of Islamic law and jihad—and for the condemnation of me for even raising the issue of Islamic jihad—that was to come.

The onslaught began with the first “question,” actually a monologue that lasted nearly fifteen minutes. The monologist claimed that: (1) there is a long history of separation of church and state in Islam; (2) Islamic law is good; (3) whenever imposed, Islamic law has brought peace; (4) jihad is a “wonderful idea” and does not mean war; (5) Islamic Totalitarianism poses no threat, since 500 million Muslims reject terrorism; (6) the tax leveled against subjugated peoples is just, because they are protected by Muslims in return; (7) I am “ignorant of history” if I do not acknowledge the “truth” of these claims.

I listened to him without interrupting—and even asked a legitimately annoyed member of the audience to allow him to finish—so that he could fully reveal himself. In answer, I re-read a series of quotes in which Islamic leaders—as well as a young girl on Lebanese television—call for jihad, war, and death; and I pointed out to the monologist that he must be quite angry at these Muslims for their incorrect view of jihad. But instead of being angry at those who give his presumably peaceful religion a bad name, he condemned me for reading their quotes. This is evasion par excellence—to condemn those who raise Islam’s violent past and present rather than have to face the fact that the vision of idyllic peace that one associates with one’s religion has no basis in reality.

(I at least got a good laugh out of this exchange when I concretized the meaning of the tax on subjugated peoples. Suppose a Mafia thug came to your door, I said, and he offered to protect you for, say, $100 a month. You would ask the thug, “From whom do I need protection?” to which he would reply: “Us.”)

Following this was more of the same: combinations of Islamic apologizing and ad hominem attacks. I was told, for instance, that I could not possibly understand Iran if I had never been there myself. By this standard, history as such is impossible; no one today can know what it was like a decade, a century, or a millennium prior to his birth. But the apologists have no problem suspending this standard for themselves when it serves their purposes, in this case to glorify Mohammad (“a peaceful man”) and 7th-century Arabia.

But one “questioner” in particular stands out: After reading a sentence from my article Notes on the Near Eastern Roots of Islam, with no context or explanation for the audience to even understand what it meant, he attacked me by saying that I should remember “logic” and the fact that I was at a “scientific” school before making statements such as those that I had made. But rather than explain to me what was illogical or unscientific about my views—let alone ask a question in the question period—he continued his ad hominem attack by stating that my views were so obviously wrong that only a “criminal mind” (a phrase he repeated) could have come up with them. Again, he never stated what was wrong with my quote, never established any reasons for his conclusion, and never asked me to clarify my reasoning—he took his assertion of the “criminality” of my mind as a self-evident fact.

On the face of it, the “scientific logic” he employed was nothing more than arbitrary name-calling—obviously a cherished technique by his “method.” But what motivated his calling me a “criminal mind”—twice?

The topic of my talk was theocracy and Islamic law. Islamic governments, as ideological states founded on claims to divine revelation, must jail—or worse—those who speak out against the clerics. This was the thug’s ideal: In lieu of rationally demonstrating the “truth” of his beliefs, he would criminalize me, or jail me, or perhaps kill me, to stop the spread of ideas contrary to his. In Iran, this ideal has already been achieved; there I would have been arrested, condemned, and thrown into solitary confinement. But in America, the thug’s ideal is frustrated; without the power of the law to silence me he was reduced to name-calling.

What deeper attack on civilization, freedom, the mind, and human life could be possible than to propose the establishment of thought crimes in an American university? His was the voice of a dark-age Nazi brownshirt longing for the day when he can destroy those who vocalize ideas that make it difficult for him to evade the irrational nature of his whims. Who is it that should be empowered to peruse articles and determine which ones constitute crimes? The thug made that very clear. Unfortunately, with but one exception, the Muslims in the audience did not say anything against him.

For a taste of what develops when people like the ones I faced have their way, read this article about a university lecturer in Iran who was sentenced to death in Iran for the “crime” of polling Iranians about their attitudes towards America. This is the real meaning of Islamic law: the destruction of the mind, and death to those who use their minds.

The content of my article is irrelevant in the face of such attacks on the mind. But, for the record, the passage that the thug read was this: “There is a need for an external enemy, as a point of focus for the rage which would otherwise turn into civil war.” And here are the next two sentences: “The Arabic tribes were in constant warfare, until Islam pointed their energies outwards, into conquest. To this day, the civil wars return to such areas whenever there is no external enemy, or no dictator to keep order by force.” I wrote this because it is true. Dictatorship or anarchy is largely the rule in the Middle East today—as it was under Mohammed in Arabia, which he conquered internally and then turned outward to foreign conquest.

On display the night of my talk were the theory and practice of Islamic totalitarianism—the soul and the fist—in the evasions about Islamic history and its practices today, and in the open wish to criminalize those stating these truths.

There were, however, two bright spots to the evening. The first was a man who described himself as a thirty-year emigré from Turkey. He noted with pride that his homeland had a thoroughly secular government and he praised Kemal Ataturk for bringing Turkey into the modern age, for instance, by banning the headscarf. But today Turkey’s secular government is being undercut—by Americans who describe its government as “moderate Islamic” and thereby blur the line between theocracy and secularism. This opens the door to the establishment of Islamic law. The man’s message was this: There can be no compromise between theocracy and secular government; it is either–or. To accept “moderate Islam” into government is, in principle, to establish theocracy. I wonder if he realized that, by the standards of the brownshirt in my audience, he was a criminal for holding such a view.

The second bright spot of the evening was a young woman who asked me excitedly about Ayn Rand’s The Virtue of Selfishness. As the young woman struggled to understand Rand’s challenging ideas, our conversation continued into the hall and outside. She apologized for the actions of the audience; I told her not to be concerned with them, only herself. I am certainly glad that, for now at least, she lives in a society where she can remain focused on her own intellectual development—and safely ignore those who would stifle or slaughter her “criminal mind” before the wings of her intellect have a chance to grow.

View all articles by John David Lewis →
Letter to the Editor
Remarkable Activism—AddendumFree Speech vs. McCain and Company
Return to Top