Menahem Milson on the Meaning of Jihad 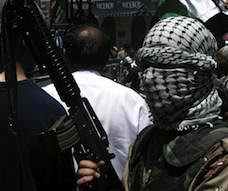 The Middle East Media Research Institute (MEMRI) has published a first-rate piece on the meaning of jihad: “Jihad Today” by Menahem Milson (Inquiry and Analysis Series, No. 411 , December 20, 2007).

The topic of this piece is the concept of jihad—but the author’s abstract theme is that ideas matter. He begins by identifying the concept of jihad as presented to school children across the Middle East today, which is that of war on behalf of Islam. Milson translates from an 11th-grade textbook used in Jordan and Palestinian areas:

“Jihad is the Islamic term equivalent to the word 'war' among other nations. The difference is that jihad is [war] for the sake of noble and exalted goals, and for the sake of Allah… whereas other nations' wars are wars of evil for the sake of occupying land and seizing natural resources, and for other materialistic goals and base aspirations.” (Al-Thaqafa Al-Islamiyya (Islamic Education), Ministry of Education, Palestinian Authority, Ramallah, 2003, p. 208.)

Milson notes that this is the meaning that matters today, for this is what motivates many Muslims to wage sacrificial war for Allah. To show the roots of this idea—and its various permutations—Milson brings forth certain facts about Islam as a cultural force across history. In his own words:

To properly understand the place of jihad in the Muslim world view, it is important to keep in mind that Islam has been, from its very beginning, not only a religion but a political community—the nation of Islam (ummat al-Islam). Muhammad was not merely a prophet communicating the word of God, but a political leader and military commander.

Muhammad’s own military victories were essential to establishing a sense of superiority in Muslims, which allowed them to pursue war against non-Muslims. But this sense of superiority was the zeal of true believers, who see their victories as due to their faith in Allah. This leads them directly to a certain world-view, which fosters the idea of continuous war between Muslims and infidels:

Originally, jihad was an obligation of the community, acting under the orders of its leader. In other words, Muslims in the community had a duty to fight when so commanded by their leaders (leaders who were political, religious, and military commanders) but were not supposed to take the personal initiative in doing so. To allow such personal initiative in a Muslim community might have granted too much authority to the decisions of individuals, and the leadership wanted to control the time and place for war. But, when Muslim areas are under attack, “jihad becomes a personal obligation of each and every Muslim even without an order from the Muslim leadership. . . .”

Islamic killers today claim that this justifies their actions. For instance, the presence of American troops in Saudi Arabia—at the behest of the Saudi government—is said to justify the Muslim killing of civilians in markets. In this view, the Saudi government has forgotten its duty to fight infidels and has thus become a legitimate target for the true believers. Faith in Allah leads to continual war, with individuals fighting endless insurgencies against infidels. The deeper foundation of this doctrine is the ethics of personal sacrifice—literally, the virtue of suicide in battle for Allah. Milson continues: “Jihad is obviously closely linked to the concept of self-sacrifice in battle for the sake of Allah (shahada). Shahada means ‘martyrdom’ . . . seeking a martyr’s death (istishhad) is especially laudable.”

Milson notes that there are three meanings of shahada: “testimony” or “bearing witness”; the pronouncement of faith; and self-sacrifice in battle for Allah, also known as “the greater shahada.” But this illustrates more deeply the connections between faith, duty to God, war, and suicide. Milson has directly connected the epistemology of faith, to the ethics of duty, to the politics of war without end.

Milson elaborates, illustrating, for instance, the Islamic promise of rewards in the next life for suicidal war in this life, and the corresponding fact that the parents of successful suicide bombers do not mourn but rather throw parties to celebrate their dead sons’ weddings in paradise. We learn here of a poem, recited by bin Laden but written by an 8th-century Muslim fanatic, that urges young men to die and be carried to heaven in the belly of an eagle. The return of jihad in the 20th century, Milson continues, was motivated by the relative decline of Muslim power in the face of western industrialization; claims that economic impoverishment have motivated suicide bombers, however, are contrary to fact. “Without recognizing that the Islamist belief system is at the root of all these terrorist acts, we cannot possibly understand the nature of these acts or the motives of their perpetrators.”

In the end, Milson presents the issue as a battle of ideas between those upholding jihad as a religious duty and those opposing suicidal war for Allah. Milson also notes why the struggle is as hard as it is:

This ideological struggle—whether it is fought by the official clerics or by writers and other independent circles—is no simple matter, because jihad is a religious duty, and the reverence for the martyrs of jihad (the shuhada of Islam's first generation—al-salaf al-salih) is shared by all Muslims. This makes the ideological struggle against the Islamists, who evoke the authority of “the pious forefathers,” all the more difficult.

The implication is clear: To counter such mystically motivated fanatics, we who wish to uphold reason, civilization, and individual rights must understand our own case thoroughly and oppose the forces of the dark ages with forthright conviction.