America's Sanction of its Enemies 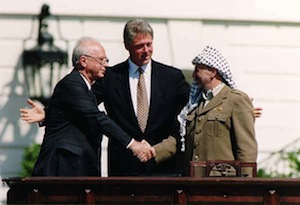 On March 1, 1973, eight Palestinian Black September killers stormed the Saudi Arabian Embassy in Khartoum during a send-off party for American Charges d'Affairs George C. Moore. They took Moore, U.S. Ambassador Cleo A. Noel, Jr., Belgian Charges d'Affairs Guy Eid, and two other diplomats hostage. They demanded the release of PLO and Baader-Meinhof Gang killers, including Robert F. Kennedy's Palestinian assassin Sirhan Sirhan, and Black September commander Muhammed Awadh (aka Abu Daud). The real reason for the attacks was not merely to facilitate the release of their terrorist cohorts, but to strike at the U.S., in order to end U.S. attempts to mediate in the region.

The next day, after President Nixon and other leaders announced their refusal to negotiate with the terrorists, Moore, Noel, and Eid were taken to the basement of the embassy, lined up against a wall, and machine-gunned to death—the killers firing first at their feet and legs and gradually moving upward in order to extend their suffering.

Yasir Arafat denied involvement. He hid behind the ruse that Black September was a group that had broken away from his own Al Fatah organization. Western leaders did not challenge Arafat's assertion. Rather, they granted him political respectability and touted him as a man dedicated to peace. He visited the White House regularly, and even received the Nobel Peace Prize. He smiled in public while he orchestrated more attacks on Americans. For over thirty years, seven American administrations and myriad State Department employees accepted Arafat's lies and denied his murderous nature.

In May of 2006, a State Department historian released a 33-year-old memo that confirmed Arafat's direct involvement in every aspect of the attack in Khartoum, including the specific order to kill the American Ambassador. The memo ends: "The emergence of the United States as a primary fedayeen target indicates a serious threat of further incidents similar to that which occurred in Khartoum."

Arafat's actions were nothing less than an act of war against America—and we have known about it for over three decades. American officials, however, chose to evade this knowledge and let Arafat get away with murder. They found this easier than to face the threat and do something about it.

The big story here is not Arafat's thuggish nature, nor even his attacks; thugs are plentiful in warlord societies, and similar attacks have continued for decades. The big story is the role of Americans (and Europeans) in keeping Arafat in power despite their knowledge of who he was and what he did. American officials evaded the identity of this enemy, granted him the status of a political leader, and empowered him. It was the sanction of the United States that put him on the world's stage—rather than into the obscure, early grave he deserved.

a man's willingness to embrace his exploiters, to pay them ransom for his virtues, to condone and help perpetuate the ethical code which feeds off those virtues, which expects them and counts on them at the very moment it is damning them as sin and condemning their exponents to hellfire. (Objectivism: The Philosophy of Ayn Rand, p.333)

This accurately describes the relationship between the United States and Middle Eastern dictators such as Arafat. American leaders have (literally) embraced such thugs, treated them as legitimate leaders, and paid them ransom to boot—all while these same thugs have condemned and attacked us. The more they have attacked, the more we have appeased, and the more we have granted them a stature they could not otherwise have achieved.

Those who sanctioned Arafat actually protected him and his ilk. They were afraid to condemn him because they were, on some level, ashamed to proclaim their own goodness. It is high time that Americans reverse this pathetic, suicidal policy, recognize our moral superiority, withdraw support for our enemies, and call for our government to destroy those who seek our destruction.

Thanks to Caroline Glick for her report on the attack and the memo: "With the quiet release of a 33-year-old US State Department cable, a good chunk of the edifice of the longest-running big lie was destroyed." For a chronology of attacks against Americans, click here.