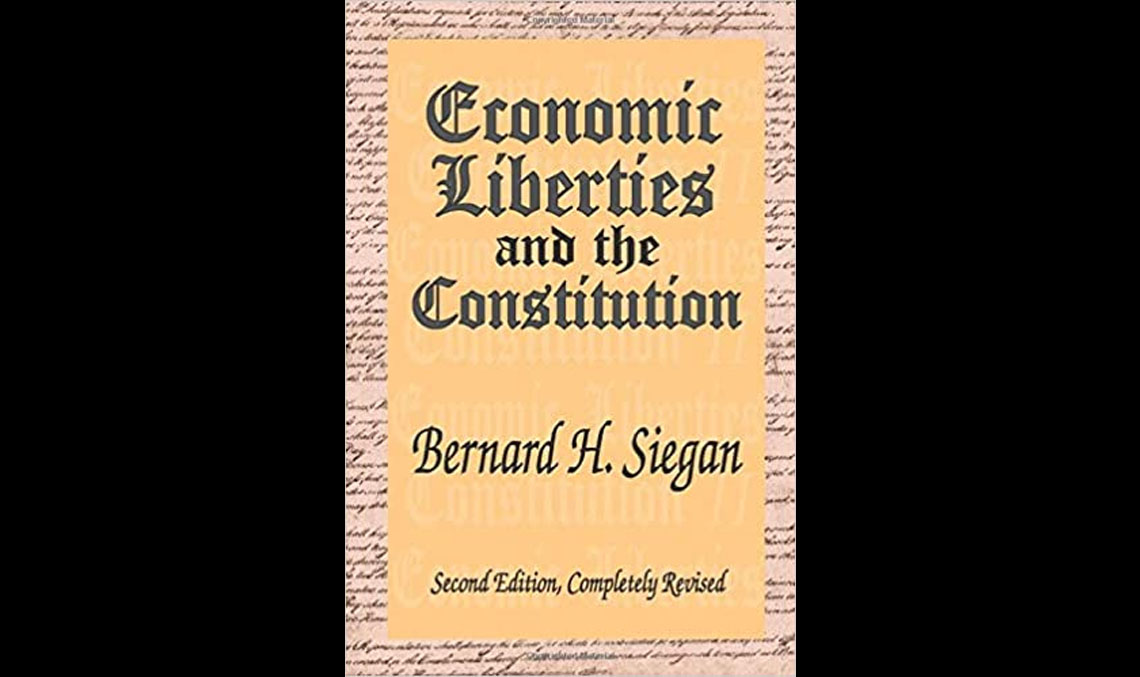 When the U.S. Supreme Court held last year that the Constitution’s “public use” limitation on the power of eminent domain would not restrain a municipality from taking the property of one citizen for the purpose of having it “redeveloped” as the private property of another, Justice Clarence Thomas dissented, noting: “Something has gone seriously awry with this Court’s interpretation of the Constitution.”1 Most people apparently agree: Public outcry has been so strong that eminent domain reform legislation has been enacted or proposed in more than forty states.2

Most close observers of the Court, however, were not so surprised by the outcome of Kelo vs. New London as by the triumphant fact that Kelo’s attorneys garnered four Justices in dissent. As the Court explained, its decision was dictated by a “longstanding policy of deference to legislative judgments” about what constitutes the right to private property.3 In a less heralded property rights case argued the same day as Kelo, the Court unanimously deemed “it remarkable, to say the least,” to believe that a rent control law should be overturned, since it would require “courts to substitute their . . . judgments for those of elected legislatures and expert agencies.”4

Despite joining the decision in the second case, Justice Thomas maintained in Kelo that “there is no justification . . . for affording almost insurmountable deference to legislative conclusions” about the constitutionality of confiscating private property.5 In reaching that conclusion he echoed the theme of Economic Liberties and the Constitution, an important book by the late University of San Diego School of Law Professor Bernard H. Siegan, published in 1980. The book is part legal history, part constitutional analysis, and part broadside against a false notion of “judicial restraint,” by which the federal judiciary has “abandoned judicial review of economic and social legislation, review which it had carried out during much of its existence.” The original edition is out of print but still widely available.6

The reader of Economic Liberties is shown that Kelo fits a nearly unbroken pattern of judgments regarding economic liberties cases since 1934. Consider Hawaii vs. Midkiff, the 1981 case previously the last word on eminent domain and on which Kelo relied: The court “made clear that it will not substitute its judgment for a legislature’s judgment as to what constitutes a public use,”7 justifying the taking of private property. . . .

View all articles by Larry Salzman →
Evil, and UncorrectableFrom the Editor, Winter 2006–2007

2 The most comprehensive listing is available at http://maps.castlecoalition.org/legislation.html, a website maintained by the Institute for Justice. IJ attorneys Dana Berliner and Scott Bullock represented the plaintiffs in Kelo before the Supreme Court, and continue to lead the movement for reform.

6 The 1980 edition is published by University of Chicago Press. An “expanded second edition” published in 2005 by Transaction Publishers is now available, but it cannot be recommended above the original edition. The new book, although possessing the same title, contains substantially different content and amplifies flaws of the original edition discussed here. Attorneys, historians, or those with more than a layman’s interest in the subject of economic liberties, may find it of interest to compare both.

11 Worthwhile sources in this group are Howard Gillman, The Constitution Besieged (Durham, N.C.: Duke University Press, 1993); Barry Cushman, Rethinking the New Deal Court (New York: Oxford University Press, 1998); James W. Ely, The Guardian of Every Other Right: A Constitutional History of Property Rights, 2nd ed. (New York: Oxford University Press, 1998); G. Edward White, The Constitution and the New Deal (Cambridge, MA: Harvard University Press, 2000). Each of these books contains valuable material and presents more detailed history than Economic Liberties, and Gillman’s work is the most influential among academics. The newer books, except Ely, however, all tend to slant their presentations to favor liberal political ideals. A good criticism of Gillman’s interpretation of leading “ Lochner-era” cases, and a valuable article on its own, is David E. Bernstein, “ Lochner Era Revisionism, Revised: Lochner and the Origins of Fundamental Rights Jurisprudence,” Georgetown Law Journal, vol. 92, no. 1, November 2003, pp. 1–60.

18 There is a fair question as to whether the drafters of the 14th Amendment had the Due Process clause in mind as the appropriate element of the constitution for the protection of economic rights. There is much overlap in the meaning of “due process,” “privileges or immunities,” and “equal protection,” in the 14th Amendment. Siegan does not deem it important in the context. He writes, “If [judicial] transgression occurred under economic due process, it related mostly to form; perhaps other provisions of the Constitution were more appropriate to the issue. The error of succeeding courts is greater. By totally ignoring or rejecting relevant constitutional meanings and background, the contemporary Supreme Court has committed [a] substantive mistake—a higher degree of fault.” It is likely that the proponents of the 14th Amendment believed the privileges or immunities clause to be the “catch-all” protection for individual rights that the Due Process clause became. See, for instance, the separate dissenting opinions filed by Justice Stephen Field and Justice Joseph Bradley in the Slaughterhouse Cases, 83 U.S. 36 (1872); and Richard A. Epstein, “Of Law and Persons: Reconstructing the Privileges or Immunities Clause of the Fourteenth Amendment,” New York University Journal of Law and Liberty, vol. 1., no. 1, 2005, p. 334. An interesting discussion in the context of a blueprint to restore the Privileges or Immunities clause to constitutional law is found in Clint Bolick, Unfinished Business: A Civil Rights Strategy for America’s Third Century (San Francisco: Pacific Research Institute, 1999). Siegan himself, however, has elsewhere argued that the case for substantive due process is deeper than most writers suppose; see: Property Rights from Magna Carta to the Fourteenth Amendment (New Brunswick, NJ: Transaction, 2001).

28 Ascendancy, rather than introduction, is unfortunately the proper term: As indicated in this article, competing conceptions of individual rights and consequent doctrines of judicial review have been present since the Founding. For an early, nearly identical statement of the standard of review ultimately adopted by the New-Deal-era court, see Ogden vs. Saunders, 25 U.S. (12 Wheat.) 213, 270 (1827). (“It is but a decent respect due to the wisdom, the integrity, and the patriotism of the legislative body, by which any law is passed, to presume in favour of its validity, until its violation of the constitution is proved beyond all reasonable doubt.”). Siegan discusses Ogden in a positive light, which is curious but highlights that even under the guidance of bad standards of review, older generations of judges were nevertheless more protective of property rights.

34 Randy E. Barnett’s book Restoring the Lost Constitution: The Presumption of Liberty (Princeton, NJ: Princeton University Press, 2004), for instance, is a much more comprehensive treatment of the subject, proceeding from a discussion of the 9th Amendment. It is better integrated and more hierarchically structured. However, it is tightly integrated with a particular version of originalism associated most closely with him and some others (see, e.g., Scott Gerber, To Secure These Rights: The Declaration of Independence and Constitutional Interpretation (New York: New York University Press, 1996); Timothy M. Sandefur, “Liberal Originalism: A Past for the Future,” Harvard Journal of Law and Public Policy, vol. 27, no. 2, Spring 2004, pp. 489–542.

35 Specifically, Richard A. Epstein, How the Progressives Rewrote the Constitution (Washington, DC: Cato Institute, 2006). It is, nonetheless, a pithy, accurate introduction to the collapse of the separation of powers in the 20th century.

36 For a good discussion of textualism and related ideas, see Adam Mossoff, “The Threat of a Conservative Supreme Court,” The Intellectual Activist, vol. 14, no. 3, September 2000, pp. 17–29.

38 This principle is a fundamental to Siegan, who expands on his view in “Majorities May Limit the Liberties of Individuals Only When the Constitution Authorizes It,” San Diego Law Review, vol. 27, no. 2, Winter 1990, pp. 309–358.

41 Two such writers with works expressing views similar to Siegan on the Due Process clause, who are still worth reading today, are Thomas M. Cooley, A Treatise on the Constitutional Limitations Which Rest Upon the Legislative Power of the States of the American Union, 3rd ed. (Boston: Little, Brown & Company, 1874); and Christopher G. Tiedeman, A Treatise on the Limitations of the Police Power in the United States (St. Louis: F. H. Thomas Law Book Co., 1886).

43 Thomas Jefferson, Thomas Jefferson: Writings, edited by M. Peterson (New York: Library of America, 1984), pp. 1513–14. (“[W]hen . . . Blackstone became the student’s hornbook, from that moment, that profession (the nursery of our Congress) began to slide into toryism, and nearly all the young brood of lawyers now are of that hue.”)