Why I Will Not Vote for Any Republican 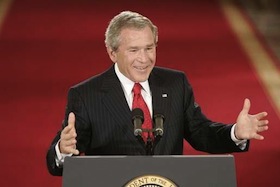 In the upcoming election, I will not vote for any Republican. My reasons are based on those offered by philosopher Leonard Peikoff, and I agree with him completely. A straight Democratic vote in this election is the only rational choice I can make. I would not, however, vote Republican today even if the issue of government religion was not relevant.

In every area of domestic and foreign policy, the conservatives controlling the Republican Party have expropriated the central tenets of the left, while claiming to be an alternative. This has created a false alternative to the political left, posing as its opposite but supporting the same basic goals. This has sowed massive confusion in people's minds, and limited the American people to a choice of poisons. This confusion is undermining people's capacity to even conceive of a true alternative to the welfare state and military defeat.

The matter becomes all the more urgent , and the consequences more dangerous, when motivated by a civic religion and its claims to supernatural sanction.

The left is of no cultural importance here. They are clearly socialistic at heart, and want America to retreat before the whims of foreigners. It is easy to establish an opposition to them—whenever an alternative has been clear, their failure has been inescapable. But the Republicans, by forming a phony choice, have made it much more difficult to discern a true alternative.

Under Bush, the Department of Education has nearly doubled in size. Attempts to eliminate Social Security have mutated into plans to save it. Private savings accounts will be owned by individuals but controlled by the government. Private medicine will be by cartels, under government controls and grants. Welfare will be distributed by private groups, including churches and other religious organizations, who will seek the approval of government bureaucrats. All of this is in fundamental agreement with the welfare state, even if the form differs from what a leftist might prefer—and its claims to religious sanction give it a power that the left does not have. . . .