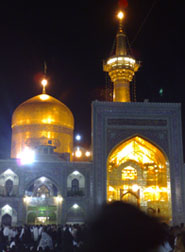 America is not being attacked by bombs or hijacked airplanes or government buildings or military installations. We are being attacked by people—specifically, by Islamists: people who believe the Koran is true, take its precepts seriously, and thus actively seek the submission or destruction of non-believers. Where are Islamists being produced? Primarily in the mosques and madrassahs (colleges in which students are trained to be Islamists) of the states that sponsor terrorism—especially Iran and Saudi Arabia. Who is producing them? The mullahs, imams, and teachers are. Accordingly, we cannot put an end to this assault merely by taking out government buildings and military installations in enemy states. To put an end to it, we must eliminate those who preach or teach the idea that infidels must die. We must demonstrate that to spout such evil is to ensure personal destruction.

If anyone does not abide in me he is thrown away like a branch and withers; and the branches are gathered, thrown into the fire, and burned. [John 15:6]

Fight and kill the disbelievers wherever you find them, take them captive, harass them, lie in wait and ambush them using every stratagem of war. [Koran 9:5]

If a Christian college in the U.S. called for its students to take the Bible seriously—that is, if it taught them that they must actually obey all of God's commandments—the teachers and administrators would be guilty of inciting the students to murder not only unbelievers, but also homosexuals, children who talk back to their parents, people who work on the Sabbath, and so on. Consequently, the teachers and administrators would rightly be thrown in jail. Christian colleges in America don't do this, of course, because Christianity has been tempered by the Renaissance and the Enlightenment, and because American Christians are required by the U.S. Constitution to disobey their alleged God in this regard. Disgruntled though some may be about this, they begrudgingly obey U.S. law so as not to spend their "unimportant life" in jail.

People have a right to believe whatever nonsense they want to believe, but they do not have the right to act on their beliefs if doing so means committing murder or violating individual rights. The individual is greater than "God" and morally must be protected from those who "just believe" otherwise. The U.S. government has a moral responsibility to protect American citizens accordingly.

The basic principle of a proper American foreign policy is that the U.S. government must hold the life and rights of each and every American—whether civilian or soldier—as of greater value than the lives and rights of all non-Americans in the world combined. Our government's sole responsibility is to protect Americans, and it morally must do so by whatever means necessary—with as little risk to the lives of our soldiers as possible.

A moral approach to the Islamist war against America does not consist in half-heartedly "engaging" one enemy tribe here, then another there, then another elsewhere—all the while sacrificing the lives and limbs of American soldiers. Nor does it consist in sending American soldiers into hostile territory when we have the means to destroy the enemy without risking the lives of our soldiers. Nor does it consist in retarding our operations or prolonging the war in order to avoid killing innocents or non-combatants in enemy territory. A moral approach to this god-awful problem consists in demonstrating, once and for all, the futility of taking Islam seriously, the futility of obeying the Koran, the futility of seeking the submission or destruction of disbelievers, the futility of attacking Americans. It consists in efficiently killing Islamists—especially those who make a "living" producing more Islamists.

In conjunction with the other elements in this 5-step plan, we should kill the Iranian preachers and teachers who chant and spout "Kill the disbelievers" and "Death to America." We should aim to kill all of them. And the best way to do this is to bomb the Iranian mosques and madrassahs when they are most likely to be occupied. Were we to do so, the practice of taking the Koran seriously and warring with America would suddenly become unattractive, and most (if not all) of the remaining Islamists in the world would quickly become mere Muslims, akin to the mere Christians next door. (As always, the deaths of all innocents in such a campaign are the sole responsibility of those who necessitate such retaliatory measures—and those apologists who evade the facts, drop context, and attempt to muddy the waters on such issues, thus delaying justice and necessitating the deaths of even more innocents.)

Of course, the Bush administration will not take such egoistic action against Iran, and we will pay dearly for the compassionate half-battle it will wage there instead. But if egoists do not say loudly and clearly what needs to be done, America will never take such action. And that will mean the end of America.

View all articles by Craig Biddle →
A Talk by Dr. John LewisFall Issue of TOS
Return to Top